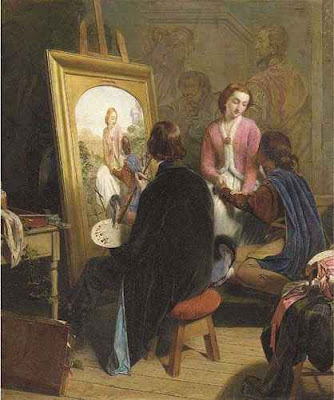 a satire on the PRB
http://en.wikipedia.org/wiki/Henry_Nelson_O'Neil
O'Neil was a member of The Clique, a group of artists in the 1840s who, like the later Pre-Raphaelite Brotherhood, met regularly to discuss and criticize one another's works. The other members of The Clique were Augustus Egg, Alfred Elmore, Richard Dadd, William Powell Frith, John Phillip, Edward Matthew Ward.
Most of the Clique opposed the Pre-Raphaelites, but O'Neil was the most virulent in his condemnation of the movement, attacking them in both paintings and writings.
http://www.rubycavalierfinearts.com/Henry-Nelson_O'Neil/The_Pre-Raphaelite.htm
Posted by Hermes at 6:00 AM