Edward Burne-Jones - Study for the portrait of Dorothy Drew 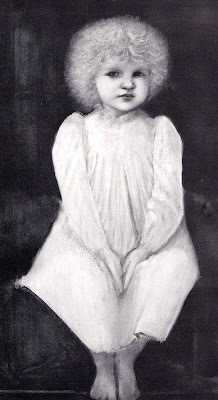 oil on canvas
Dorothy Drew was Gladstone's grand-daughter.
She was still alive in the 1970's but told a researcher she could only remember the mice under the studio floor!
http://query.nytimes.com/mem/archive-free/pdf?_r=1&res=9B06E3DC1131E033A25755C1A96F9C94659ED7CF
compare this with this old print:
http://www.old-print.com/cgi-bin/item/AMAR1033545#
I can't find a biography of Dorothy but as a child she seems to have had rather a reputation as an 'enfant terrible'.
Nor can I unfortunately trace the finished picture, though there is a reference to it in Burne-Jones by O. von Schleinitz, 1901, p. 113
Posted by Hermes at 6:00 AM

We are creating the Catalogue Raisonné of Burne-Jones: www.eb-j.org. You could be of great help to us. Please would you contact me on peternahum@leicestergalleries.com and not on the contact email.
Best wishes Peter Nahum