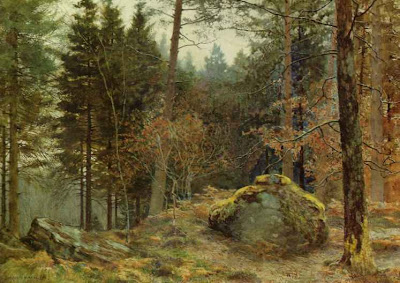 [In a Welsh pine wood]
exhibited 1891
pencil and watercolour with gum arabic and with scratching out
.
1853-1930.
http://www.artnet.com/artist/656391/james-thomas-watts.html
http://www.1st-art-gallery.com/James-Thomas-Watts/James-Thomas-Watts-oil-paintings.html
http://www.bridgemanartondemand.com/artist/10498/James_Thomas_Watts
Born in Birmingham (the exact year is unconfirmed). Went to school in Birmingham and then to the Birmingham School of Art where he was influenced by the writings of Ruskin and the works of the Pre-Raphaelites. He was true to nature and tried to be as naturalistic as possible. His use of light seems to owe a debt to Corot and the French luminists. In 1883 he married Louisa Hughes, second daughter of the Rector of Kislinsbury. She was also a landscape painter. From 1874 he seems to have lived in Liverpool but from 1878 exhibited at the RA. He was well known in Liverpool and commanded good prices. He painted in oils and watercolour but seems to have preferred the latter. He painted many landscapes but also subjects from Shakespeare.
Posted by Hermes at 6:00 AM