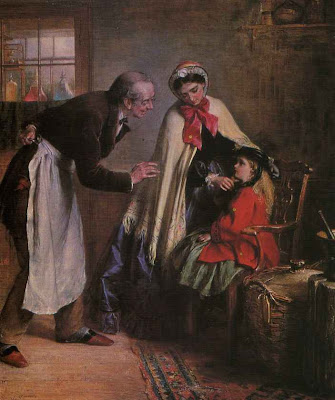 oil on canvas
Edward Hughes (1851 - 1917) was the nephew of the much more famous Arthur Hughes and Edward studied under him and Holman Hunt, sometimes serving as an assistant to the latter. There seems some influence of Millais in this pictures as well. particularly the little girl. The clothes are from the 1860's but it may have been painted later and some have speculated that it is a parody of Millais after he had gone away from the 'pure' PRB ideals.
Posted by Hermes at 5:00 PM