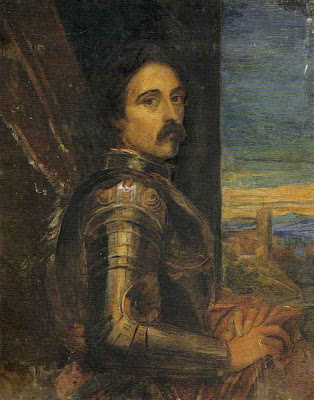 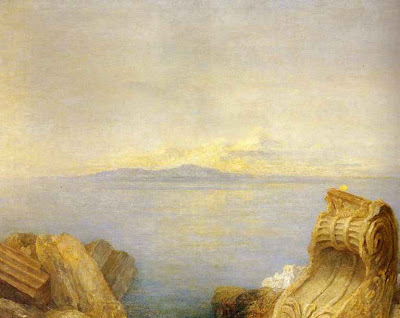 [self portrait wearing armour at the age of 28] c. 1845
watercolour heightened with gum arabic
a preliminary study for the oil portrait painted in 1845 whilst staying in Florence which he gave to his hosts, Lord and Lady Holland.
The armour has an interesting story. It was worn by a guest to a fancy dress party but found to be uncomfortable and discarded in Watts studio and found by him and used in this Romantic portrait of himself. On the right can be seen the Villa Medicea at Careggi, which the Holland's used as a retreat and in which Watts lived for long periods during his 4 year stay in Italy.
.
[The Island of Cos] 1883
oil on canvas
the island (now normally spelt Kos) was visited by Watts in 1856 in the company of the archaeologist Sir Charles Newton and the artists Val Prinsep and Roddam Spencer Stanhope for them to participate in the excavation of the Mausoleum of Helicarnassus at Bodrum. This painting, painted 26 years later, was probably made from sketches he did at the time. The ruins were to contrast man's temporal achievements in contrast to nature. The butterfly was said by Watts to signify the human soul.
Posted by Hermes at 6:00 AM