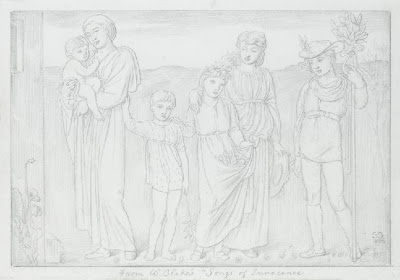 Simeon Solomon was the younger brother of the artists Abraham and Rebecca who were known for their interesting but traditional Victorian genre paintings. Simeon developed a more visionary approach to art, developed from the paintings of Dante Gabriel Rossetti and Albert Moore and the poetry of Algernon Swinburne, all of whom he was closely associated with in the 1860s. He had studied at the Royal Academy Schools from 1855 and exhibited his first picture at the Academy The Mother of Moses in 1860. During this early period in his life, he was hailed as a genius and much praised for his bold illustrations of biblical scenes, some of which were made for Dalziel's famous bible, and for his drawings of Jewish life and ritual. In 1871 everything changed when he was arrested for lewd conduct and shunned by his family and former friends. He was condemned to a life of squalor in the St Giles Workhouse in Holborn, making money by selling matches on the street. With his meagre earnings he bought artist's materials and continued to draw (usually in coloured chalk) and his work developed a haunting Symbolist intensity. With a few loyal patrons and sympathetic friends, Solomon survived for over thirty years living this precarious life and producing some of the most remarkable drawings of the period. Throughout the 1880s and 1890s his pictures were popular among the undergraduate students of Oxford and the champion of the Aesthetes Oscar Wilde wrote to Lord Alfred Douglas from Reading Goal about his regret at the loss of his cherished drawings by Solomon. Following his death in 1905, accelerated by chronic alcoholism, his work was exhibited at the Baillie Gallery in London and at the Winter exhibition at the Royal Academy. In modern times he has again been judged to be one of the most important members of the Aesthetic movement and in a wider European context, an active exponent of Symbolism.

Another illustration of 1886 to William Blake's Songs of Innocence entitled The Vision of the Doubter was exhibited at Birmigham City Art Gallery's exhibition of Solomon's work in 2005.