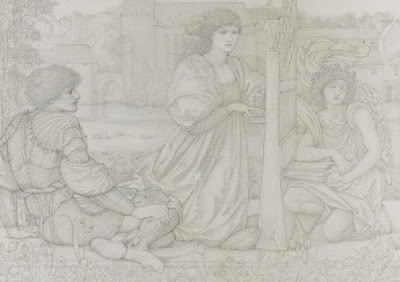 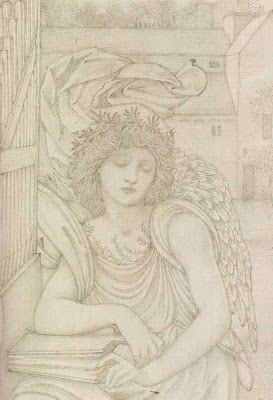 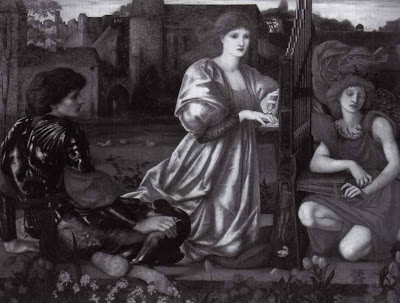 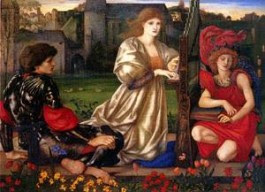 A large hi-res version of the Met oil (last two images above) are here:

CATALOGUE NOTE
Burne-Jones's interest in the subject Le Chant d'Amour originated in about 1864 when he made a design for a decorative panel to go above the keyboard of an upright piano that he and his wife Georgiana had been given at the time of their marriage. The piano itself is now in the Victoria and Albert Museum. The theme – appropriate to a musical instrument and perhaps also for the decoration of a piano received as a wedding present – was inspired by a traditional Breton song the refrain of which goes 'Hélas! Je sais un chant d'amour, / Triste ou gai, tour à tour.'

Georgiana loved these old folk songs, and it is said used to sing them to her husband in the evenings when his work was over. The composition in its various forms is loosely derived from Giorgione and the Venetian tradition of concert champêtre.

It was characteristic of Burne-Jones to reuse and develop compositions and subjects which particularly appealed to him, adapting the treatment of the figures and the mood through successive versions in different mediums and on a range of scales, but each of which may be regarded as an independent work of art. The Chant d'Amour theme led to a gouache dated 1865 now in the Museum of Fine Arts in Boston, on which occasion he introduced the figure of the knight in armour at the left who listens attentively to the notes of music played on a portable organ and which inspire in him thoughts of love. A further gouache version of the subject was made in 1866 and subsequently belonged to Euphrosyne Cassavetti, the mother of Maria Zambaco who was the woman with whom the artist would fall passionately in love a few years later. Then, in 1868, the artist was commissioned by William Graham, who already
owned the work now in Boston, to paint a large oil version of the subject, broadly repeating the scheme of the gouache but with many variations and adaptations – some, but perhaps not all, making the composition more pleasing and harmonious. A drawing of a kneeling nude male figure holding a pair of bellows, now in the British Museum, recalls the project in its final stage (although mistakenly dated 1865 by the artist). The oil version, which since 1947 has been in the collection of the Metropolitan Museum of Art in New York, is the most famous of the various
versions and one of the artist's most admired subjects. It appeared on the cover of the catalogue of the magnificent exhibition organised in 1998 to mark the centenary of Burne-Jones's death. In 1896 Burne-Jones permitted a reproductive engraving– an etching by the Scottish painter and printmaker Robert Walker Macbeth – to be made of the subject, and which was published by the Fine Art Society.

The present drawn version of the subject follows precisely in its treatment of figures and landscape setting the oil version of the subject (in for example the figure of Love, who is seen with his head raised and exposed, whereas in the Boston gouache he is blindfolded so as not to be able to witness the amorousness which may follow and which he had been instrumental in bringing about). Burne-Jones's studio records (kept at the Fitzwilliam Museum, Cambridge) reveal that he had worked intensively on the oil in 1872-3, but that it had then been set aside until 1877 when a month of uninterrupted work was given to it leading to its completion. In 1878 it was one of nine works by the artist to be shown at the second Grosvenor Gallery exhibition, lent along with Laus Veneris (Laing Art Gallery, Newcastle upon Tyne), by William Graham. The second Grosvenor exhibition was met with enormous interest, almost equal to the frenzy which had been caused by the first display the previous year, and gave pause for reflection on how a new and poetic school of painting had established in London since the late 1860s, and which has come to be known generically as Aestheticism, but which until the establishment of the Grosvenor by Sir Coutts Lindsay in 1877 had been largely unsuspected by any except the close friends of the artists and a closed circle of devoted aficionados.

When lent to the Tate Burne-Jones exhibition of 1933 (marking the centenary of the artist's birth), it was assumed that the drawing was a compositional study for the subject in its original state as a gouache from the mid-1860s, and was given the date 1865. However, it seems clear that it is in fact a replica of the subject (in 1998 John Christian described it as a ricordo (see Literature)), probably made at the time the oil version was finished in 1877 or when it was first shown in 1878.

Its inscription, which records its having been given by the artist to his friend Joseph Comyns Carr, is significant in this context – for Carr was one of Coutts Lindsay's assistants in the running of the Grosvenor, and the person – along with Charles Hallé – who was responsible for day-to-day liaising with the artists who were invited to exhibit their works at the Grosvenor. It is therefore tempting to imagine that the drawing was made as a way of saying thank you to Carr for kindnesses and good services to Burne-Jones in connection with the display of the oil version of Le Chant d'Amour. As a presentation drawing of such an important subject made at the time when the artist's reputation was rising meteorically as a result of the prestige and fashionability of the Grosvenor exhibitions, the work may be seen as something very personal and heartfelt.