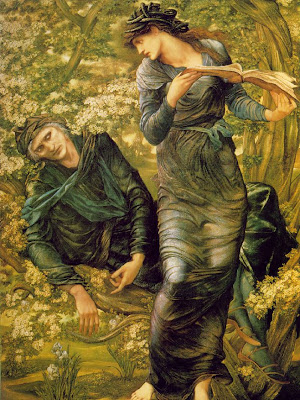 John Ruskin, who pronounced fairly that as an artist Burne-Jones "was inferior to Rossetti in depth but beyond him in grace and sweetness".

I was asked the other day should we regard BJ as an artist, or as a designer and illustrator, turning out a huge number of commissions (especially tiles, tapestries and stained glass windows) for Morris's artistic furnishing and decorating company.

I love his paintings but in all honestly they are not very adventurous considering what was happening in France at the time and they are rather 'flat' and in many cases obviously heavily influenced by Sandro Botticelli. Technically he is very clever, and this shows in his perhaps even more in his designs. But I do wonder quite where he stands as an actual painter.