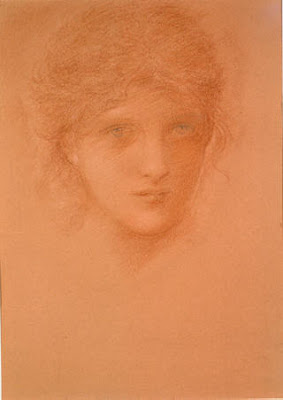 This attractive drawing exemplifies the wistful, enigmatic expression that Burne-Jones loved to give his models. The technique is one he often used at this period. Lady Burne-Jones quotes him writing on the subject of red chalk to the artist E. R. Hughes, who also favoured the medium for his drawings:

The ancient red is a far more crimson and rosy tint than the dusty brown sticks they give us now, and I have understood always that the ancient red is exhausted and that we have fallen on evil days and can get no more of it, and…I am always asking about it of every colourman I meet, in vain…I am waiting till I can find one stick of the tint Correggio used (Memorials of Edward Burne-Jones, 1904, vol.2, p.322)

As so often with Burne-Jones at this date, the drawing seems to have been conceived as an independent study, unrelated to a picture. Given his tendency to impose his own visual ideal on his models, it is unlikely that the sitter will ever be identified.

Tthe drawing was in the vast collection formed by William Hesketh Lever, first Viscount Leverhulme, the wealthy manufacturer of Sunlight Soap. The drawings were given by him to the Lady Lever Art Gallery, Port Sunlight, which he built after the first world war for the benefit of his workforce and in memory of his wife; but they were among many items which were sold by the Trustees at Christie’s in 1958, at a time when Victorian art was out of fashion.

http://www.cecilhigginsartgallery.org/paintings/burneb4.htm
Posted by Hermes at 1:00 PM