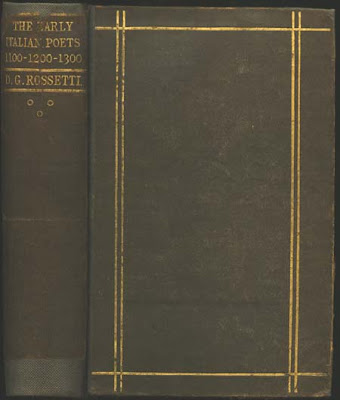 Provenance: Gifted by the author in 1864 to Mrs. William Bruce; thence in 1866 to her daughter Anna Mary Bruce (b.1846); A.H. Martin by 1878.
The original recipient, Mrs. Mary Elizabeth née Conybeare Bruce (ca.1818-1866), was the daughter of the Dean of Llandaff & the wife of Canon William Bruce, who in 1869 approved DGR's request to retouch his Llandaff Cathedral reredos (see DGR as Designer & Writer 1889, p.67); she was also the sister-in-law of Sir Henry Austin Bruce, a friend of DGR's since 1856. In 1862, in a fit of profound remorse & sadness, DGR buried his manuscript poems, which were to be published as Dante at Verona and Other Poems, with his recently-deceased wife. In Sept. 1869, after being convinced by a few friends that he should publish his lost poetry, DGR wrote to Sir Henry personally requesting his legal consent for Elizabeth Siddal Rossetti's exhumation in order to retrieve his manuscript notebook. This remarkable copy, dedicated to DGR's wife & advertising his forthcoming but soon abandoned edition of poetry, was presented to the sister-in-law of the man whose later consent for the exhumation made such an edition (Poems 1870) possible.


And, The Rare Issue With Seven Integral Leaves


http://www.leonardrobertsbookseller.com/661.html
Posted by Hermes at 6:00 AM