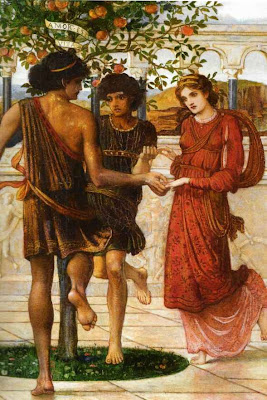 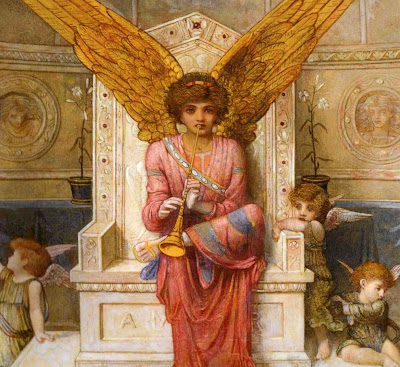 Love's Music represents John Melhuish Strudwick's extraordinary and most individual style of painting in its first phase. Many of Strudwick's paintings had titles and themes which evoked music whether played or sung. Song without Words may have been the earliest of these, and Love's Music therefore the second. These were the works that set the pattern of the artist's professional career. The composition of the central panel shows at its centre a stonebuilt apse enclosing a throne upon which is seated the figure of Love, a youth draped in red robes and with gilded wings, and at whose feet are four cupids. He is identified by the word 'Amor', carved into the lower panel of his throne.

Love plays a horn which suggests the painting's main theme and symbolic gist. On either side of the apse stone colonnades, incorporating relief sculptures, extend across the width of the composition, and through which may be glimpsed a rolling landscape of hills and coast. In front is a paved area, and with fountains playing in red stone basins.

At either side are groups of figures, each gathered around fruit trees growing in circular beds, and prompted by the sound of the music to see whether love will bring happiness or tragedy.

On the right side, four figures hold hands and form a circle around the tree to engage in a courtly dance, with the two men each raising their right feet in step, while the two women demurely watch their respective suitors. The hopeful message of this episode is supported by a band which rests in the branches of the tree, lettered with the words 'Amorest vita'. On the panel's left side, however, a parallel scene unfolds, which warns that all may not end happily: two men
who are rivals for the love of one woman confront one another around the tree, with one shooting an arrow which strikes the woman who is the object of both of their desires. She dies in the arms of the other. Here the inscribed message is 'Amor est morte'.

The two separate lateral panels show scenes which may be regarded as the consequences of the alternatives of contentment or rivalry in love. On one side we see a scene illustrating the motto 'Amor est concordia', showing a loving man and wife seated together and with their child in a sculpted throne, while a maiden dances to them. On the other side, however, is shown a similar throne but which is here abandoned and already overgrown with brambles, while a desolate woman refuses to be comforted by the figure of a king who kneels before her. The message here is that 'Amor est discordia'.

The highly crafted and otherworldly style of painting which Strudwick adopted owed much to the formative experience that he had working as a studio assistant for John Roddam Spencer Stanhope the early 1870s, and later while working for Burne-Jones. His painting, like theirs, is a manifestation of the aesthetic culture that established in certain circles in London in the 1870s, with its particular affection for an Italianate world and for remote and indeterminate historical epochs.

Strudwick was accused of plagiarising certain early Italian Renaissance painters, a charge refuted by George Bernard Shaw in an important article describing Strudwick's art: 'There is nothing of the fourteenth century about his work except that depth of feeling and passion for beauty which are common property for all who are fortunate enough to inherit them' ('J. M. Strudwick', Art Journal, 1891, pp. 97-101).

Strudwick was slow to establish a professional reputation, with his works repeatedly rejected by the selection committees at the Royal Academy. However, in the mid 1870s he began to find opportunities to exhibit, with one painting of his - Song without Words - being shown at the Academy and in fact causing a certain degree of excitement and finding a buyer, and then the following year the present subject's appearing at the first summer exhibition of the Grosvenor Gallery.

This new exhibition space, established in a purpose-built gallery in London's New Bond Street in 1877, was recognised from the start as representing the acme of artistic fashionability. Great excitement was caused by the display of works by several progressive artists, notably Edward Burne-Jones, whose paintings and drawings had been very rarely displayed in London since 1870. With Burne-Jones were also represented a group of what the Art Journal in 1878 dubbed 'thoughtful and gifted disciples of the quasi-classic, semi-mystic school', and who were regarded
loosely as his followers. Works were sent to the Grosvenor exhibitions by the invitation of its proprietor, Sir Coutts Lindsay. He in turn took advice and canvassed opinion from artist-friends, always seeking to show works that were fresh and original, and often of the type that was considered exceptionable at the Royal Academy. How he first became aware of the then obscure figure of J. M. Strudwick is not known, but it can be assumed that either Burne-Jones or John Roddam Spencer Stanhope, for each of whom Strudwick worked as a studio assistant, would have recommended his work to Lindsay. In any case, from the time when the present tempera painting on three panels appeared there in 1877 Strudwick became a regular participant in the Grosvenor exhibitions, showing fourteen works there over the following ten years.

Although Strudwick was still an artist with minimal reputation at the time of its first appearance at the Grosvenor Gallery, Love's Music was received with enthusiasm by the reviewer of the Art Journal, who coupled it with a painting entitled Eve Tempted by Spencer Stanhope: 'We must likewise commend [...] John M. Studwick's "Love's Music", in several compartments.' (Art Journal, 1877, p. 244). There seems to have been a particular taste for Strudwick's art in Liverpool and other northern cities; this work was, however, acquired by Henry Hill, who lived in Brighton, whether bought directly from the Grosvenor exhibition or subsequently is not known. Hill was clearly deeply attracted to Strudwick's work, as he eventually owned five paintings by him, in addition to the present, works entitled Love and Time, Peona, Isabella and Passing Days. All were included in the sale of Hill's collection in 1889, with Love's Music securing the second highest price of the five - 300 guineas. Hill was a remarkable collector in one particular respect: he combined an affection for latter-day Pre-Raphaelite paintings of the present type with a pioneering (in the English context) taste for progressive French painting, from the works of Corot, Millet, and the Barbizon school, through to that of Monet and Degas, by which last artist he had no fewer than seven works in his house in Marine Parade, Brighton.