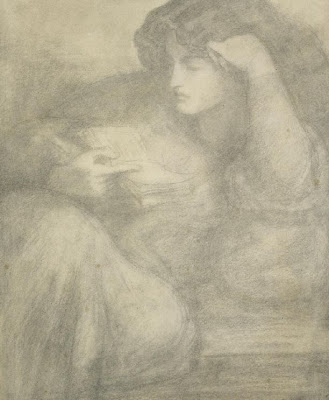 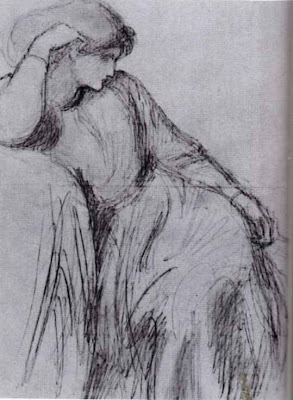 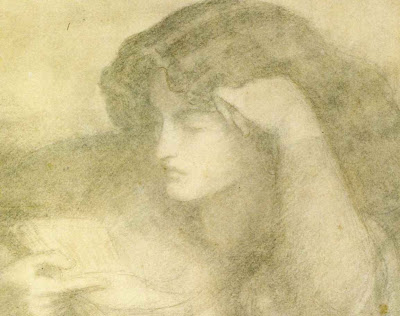 
Jane Morris is seen seated on a sofa or day-bed, with her head supported by her left arm the elbow of which rests on a cylindrical cushion placed against the right hand end of the seat. Her luxuriant dark hair is parted at the centre and falls to her shoulders. She holds a book in her right hand, the pages held open by her thumb and forefinger. Her knees are drawn up.

The signature and date of 1870 inscribed on the drawing may have been added at a later date. However, there is no reason to doubt that the drawing was made that year. Although not previously recorded, it takes its place among a series of drawings of Jane done in 1870, often showing her reading books or papers and seated on the same wide upholstered bench with bolsters at each side. Others of a similar type include that made on 25 July 1870, now in the Museum of Fine Arts, Boston (Virginia Surtees, The Paintings and Drawings of Dante Gabriel Rossetti 1828-1882- A Catalogue Raisonné, 1971, cat. no. 378); another made the following day (Surtees cat. no. 379); and a third made on 27 July, now in the British Museum (Surtees cat. no. 380). A further pen and ink drawing showing Jane leaning against the right wing of the sofa was made on 29 November (Surtees cat. no. 383) and was once in the collection of Cyril Flower. An undated pencil drawing showing the same sitter similarly resting her head on her hand, but with the position reversed (Surtees cat. no. 390) belonged to J. P. Heseltine and is now in the Cincinnati Art Museum (FIG. 1).

This was a period when there were some opportunities for Rossetti and Jane Morris to be together, even though her health was not good. In the spring of the year they were both invited to stay at Scalands, the home of Barbara Bodichon near Robertsbridge in Sussex. In 1871 Rossetti and William Morris took a joint tenancy of Kelmscott Manor, allowing Jane and Rossetti to be together and perhaps to have had a love affair.

The present drawing belonged to Daisy Fellowes (1890-1962). She was born in Paris, the daughter of Jean Elie Octave Louis Sévère Amanieu Decazes, Duke Decazes and Glücksbierg, and Isabelle-Blanche Singer. She was thus the heiress to the vast American Singer sewing-machine fortune as well as being linked to the European aristocracy.

She married twice, on the first occasion to Jean Amédée Marie Anatole, Prince de Broglie, in 1910. Three daughters were born to them, before her husband's death from influenza in 1918. She was remarried in 1919 to Reginald Ailwyn Fellowes, and had one further daughter – Rosamund Daisy Fellowes. Daisy Fellowes was a woman of extraordinary beauty and was a most daring leader of fashion. Many of her most remarkable clothes were made for her by the surrealist couturier Elsa Schiaparelli. She wrote various novels and poems, among the former Les Dimanches de la Comtesse de Narbonne (1931). She lived principally in Paris, where she died in 1962, although she also had connections with England through her second husband.