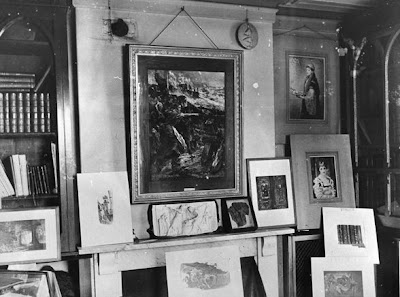 I've been away a few days and perhaps I came back with a renewed interest but there is just SO MUCH pre-raphaelite material about - I must bore the pants off must people. And more and more I realise for all his very odd personal life Ruskin was a Genius and a key figure of the Victorian era. I came across this while looking at his life:

In 1875, Ruskin came to Sheffield to visit a former student. Henry Swan was an engraver whom Ruskin had taught in the 1850s at London's Working Men’s College. Swan had moved to Sheffield because of its reputation for fine metal work. He set up home with his family in the suburb of Walkley.

Much taken by Swan's new surroundings, Ruskin saw the opportunity for a museum that would meet the needs of local 'workers in iron' (Works, 28, p. 395). He hoped it would be 'extended into illustration of the natural history of the neighbourhood'. A cottage was purchased for the purpose in 1875, and Ruskin installed his old student in the role of museum curator.

Ruskin called this new foundation The St George's Museum. He had been interested in the legend of St George from a young age, having characterised the saint in 'The Puppet Show', a work he wrote at the age of nine or ten. Its first stanza read,

'"I am the bravest Knight of all
My armour is of gold;
O'er all the field death spreads his pall
When I my wrath unfold."'
(Works, 2, p. xxxiii).

http://www.ruskinatwalkley.org/index.php?hotspots=off
On the original picture on the web site, there are useful hot spots on some of the objects.
Posted by Hermes at 6:00 AM