John Everett Millais - Greenwich Pensioners at the Tomb of Nelson 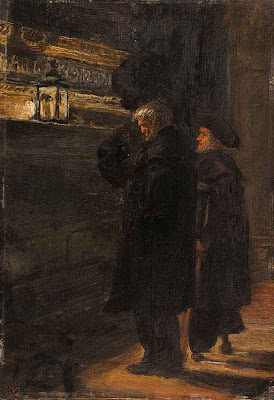 signed with monogram (lower left) and signed and inscribed 'Greenwich Pensioners/before the tomb/of Nelson/J.E. Millais R.A.' (on an old label on the reverse)
oil on board
13 x 9 in. (33 x 22.8 cm.)

A small version of a picture exhibited by Millais at the Royal Academy in 1868, with the title Pilgrims to St. Paul's (where Nelson is buried). The large picture (56 x 44in.), which, like the present version, was bought from the artist by Agnew's, was destroyed in a fire at Tilbrook Hall, near Kimbolton, in 1933.

We are grateful to Dr. Malcolm Warner for his help in preparing this catalogue entry.
Posted by Hermes at 6:00 AM