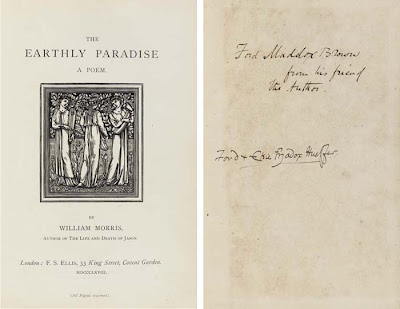 "Ford Maddox [sic] Brown from his friend the Author"

When Sydney Cockerell suggested a cathedral game whereby various members of the Pre-Raphaelite brotherhood were associated with a particular English cathedral, Edward Burne-Jones was given Wells and Ford Madox Brown Peterborough. It is therefore not inappropriate that one of the most spectacular passages in The Earthly Paradise is the Wanderer's description of the west front of Peterborough cathedral under construction. As their biographers have noted, Morris and Brown made similarly "unequal" marriages to their models. Morris's wife, Janey, "belonged to the substratum of Oxford society recreated some years later in Jude the Obscure" (Macarthy, p. 136), and Brown's second wife, Emma, was the illiterate daughter of a farmer. For two or three years their marriage was kept a secret from all except his closest friends so that he could educate her. Both men were members of the the Corps of Artist Volunteers formed in 1859 as a reaction to the threat of invasion by Napololeon III. Most crucially, Brown was one of seven partners in the firm of Morris, Marshall, Faulkner and Co, the decorative arts firm set up by Morris in 1861 following completion of the Red House in South London. At forty, he was not only the oldest partner but the most productive and high powered. It was also in 1861 that Morris began The Earthly Paradise, a long poem Chaucerian in its language and plan, but mingling classical and Norse elements.

After Ford Madox Brown's death in 1893, Morris was approached by Longmans to write his biography. When he refused, the commission passed to Brown's grandson, Ford Madox Ford, then still in his early twenties. Ford attended socialist meetings at Morris's Kelmscott House in 1893/4. His founding of The English Review in 1908 -- one of his greatest achievements -- largely stemmed from principles with which Morris would have been in sympathy: "I am an idealist and my ideal is to run the ER as far as possible as a socialistic undertaking." Nevertheless, the Pre-Rapahelite heritage was one which he eventually came to reject. "What the poet ought to do is to write his own mind in the language of his day," he wrote in 1913. "Forget about Piers Plowman, forget about Shakespeare, Keats, Yeats, Morris, the English Bible and remember only that you live in our terrific, untidy, indifferent empirical age, where not one single problem is solved and not one single accepted idea from the past has any more any magic" [quoted by Saunders, I, p. 371].
Posted by Hermes at 6:00 AM