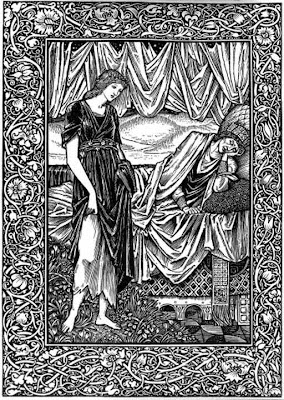 MORRIS, William. The Earthly Paradise. Hammersmith 1896-97. 8 vols. 4o. Printed in Golden type in black and red, title and facing page of vol. I with full woodcut page-borders, text opening of all other vols. with similar double-page borders, each vol. with one internal double-page opening, vols. IV, V and VII each with two double-page openings, a number of partial page-borders, numerous 10-line and smaller initial capitals, printer's device. Original limp vellum, spines gilt-lettered, silk ties, uncut (minor wear to upper spine end of vol. I). LIMITED EDITION, one of 225 copies of an edition of 231. Cockerell 41, 41a-f ("None of the ten borders used in the Earthly Paradise appear in any other book. The four different half-borders round the poems to the months are also not used elsewhere"); Peterson A41. The first two vols. were issued by Morris himself, the remaining vols. carry the statement on the colophon page "Printed by the Trustees of the late William Morris at the Kelmscott Press."
Posted by Hermes at 6:00 AM