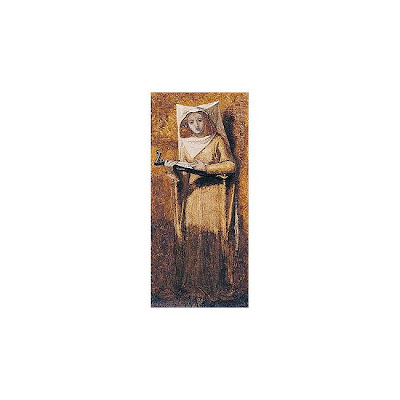 This watercolour of a girl in medieval dress singing and playing a lute was made while Rossetti was staying with William Bell Scott in Newcastle in June 1853. In a letter to his brother William Michael, dated 1 July 1853, Rossetti wrote: 'I have done little here. However I have made a little watercolour of a woman in yellow, which I shall be able to sell, I have no doubt.' It has been suggested that the drawing was done by lamplight (see Royal Academy of Arts, Dante Gabriel Rossetti, exhibition catalogue, 1973, p.29), but it is as likely that the figure is shown lit by a beam of sunlight in a shadowy interior. The girl's face is a likeness of Elizabeth Siddal, but as she did not accompany Rossetti on this trip to the north, it cannot have been done from life.
A year or two afterwards the watercolour passed into the possession of John Ruskin, who in the mid-1850s was taking a close interest in Rossetti's painting. In a letter to Dr Henry Acland, dated by Cook and Wedderburn (the editors of the Ruskin Library Edition) to '1855' Ruskin described how he had been looking for a drawing by Rossetti for Acland (who had given Ruskin £5 to pass on to Rossetti by way of payment). Ruskin selected from Rossetti's portfolio a pencil drawing for a subject entitled The Eating of the Passover, which Rossetti had presumably promised to Ruskin, and took for himself instead 'a coloured sketch, which was not what you wanted at all, but will be very useful to me. I was very glad to extricate it from the mass of the condemned [works by Rossetti that were being destroyed by neglect] - it is a single figure in a golden dress singing.'
Ruskin valued the drawing as an example of Rossetti's work with what he called 'the right feeling'. In 1865 he had a frame made for 'the golden girl with black guitar'' and sometime later he gave it to Constance Hilliard, the niece of Pauline Trevelyan who joined Ruskin on trips to Switzerland in 1866 (see lot 41) and 1870, and to Rome in 1873, and who remained a close friend of his until the late 1880s .
Posted by Hermes at 6:00 AM