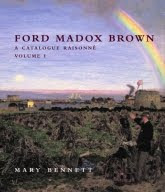 For the most magisterial and comprehensive monograph of the year — and perhaps the decade — we must turn to Mary Bennett's Ford Madox Brown (Yale, £125), two hefty volumes and 640 pages of a catalogue raisonné devoted to the half-remembered Pre-Raphaelite who never was, and one of British art's few links with the German Nazarenes. Every painter of significance deserves a Mary Bennett, and she, for discovering so much material, deserves a dozen doctorates — on Brown (1821-1893) surely nothing remains to be said. Nine years older that Rossetti, he was briefly his master but his lifelong friend, yet remained outside the PRB, a player in a complex play of influence and counter-influence. Politically interested in social justice, The Last of England and Work are his most famous paintings, but he himself was never famous; Ruskin ignored him and he was at odds with the Royal Academy. This book should encourage Tate Britain to mount a major exhibition so that the rest of us may reconsider this belligerent, ambitious, underrated and frustrated
artist.

John Brett, Pre-Raphaelite Landscape Painter (Yale, £40), by Christiana Payne, is an affectionate attempt to make major a very minor painter who, after his celebrated Stonebreaker and Views of Florence, Jerusalem and the Val d'Aosta, descended into formula. For the better part of the four decades preceding his death in 1902, he painted landscapes and seascapes on canvases and boards that were double squares, oblongs as small as 7 x 14 inches and as large as 42 x 84 — approaching a thousand in number and too many much the same. The most intriguing thing about the man was Daisyfield, the extraordinary house that he designed for himself in Putney. The last word on Brett, only for anyone compelled to explore the furthest shores of PRBism can this be a necessary book.