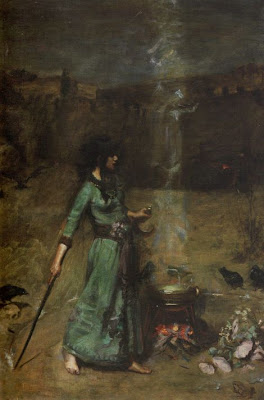 The present picture is a compositional sketch for one of J W Waterhouse's most intriguing paintings, The Magic Circle (1886). Now in the permanent collection of Tate, the larger, signed version was so well received at the Royal Academy's Summer Exhibition of 1886 that it was purchased for the nation by a committee of Academicians using funds from the Chantrey Bequest.

The fact that Waterhouse worked up this preparatory sketch in such detail underscores how seriously he viewed the 'final' canvas, the first he exhibited after his election to the rank of Associate in the Academy in June 1885. The artist had considered this occultist motif since at least 1881, when he exhibited a sepia drawing of a somewhat less agitated-looking witch at London's Dudley Gallery (private collection).

The Magic Circle was Waterhouse's third supernaturally themed exhibit in three years, coming after Consulting the Oracle and St. Eulalia (both now at Tate). In the present version and in Tate's, a sorceress with a flushed face traces a circle in an ambiguous moonlit locale defined by rocky cliffs, on top of which appear several Egyptian-looking structures, probably tombs. Watched from a safe distance by three people gathered before a lamp-lit cave that hints at the underworld, the chanting witch draws a magic circle with a cold fire of blue and yellow dabs, distinct from the hot central fire of orange, violet, and green strokes. This sketch is noticeably duskier than the final version; it is likely that Waterhouse decided to lighten his palette so that the scene could be more easily discerned in the crowded, unevenly lit Academy.

Bloated white poppies underscore the hallucinatory atmosphere inside the circle, which is anchored by the magical triangle formed by the sorceress's body and wand. In her left hand, shaped like a crescent moon, is a boline, used by Celtic Druids and witches to cut herbs, which are shown gathered at her waist. The boline hints at the growing enthusiasm for Celtic lore in the 1880s; it was widely believed that Celtic priests 'shape-shifted' into animals and trees. Ever eclectic, Waterhouse decorated the skirt not with a Celtic pattern, but with an Archaic Greek warrior encountering a serpent, perhaps Jason using Medea's potion to drug the one that protected the golden fleece.

While one black raven perches on a human skull, another prepares to land. Arranged in a rough semicircle, a total of seven such birds watch the sorceress; this magical number and shape are identical to those of the women in Waterhouse's Consulting the Oracle (Tate) two years earlier, and his famous Hylas and the Nymphs (Manchester Art Gallery) a decade later. The toad in the right foreground may be an omen, yet it is worth noting that one of the herbs prominent here is angelica, which carries positive healing associations rather than poisonous ones. It is, therefore, just possible that the sorceress has drawn a circle to counter-rather than aid-the ominous creatures watching her beyond it.

Viewers would have immediately associated Waterhouse's jet-haired sorceress with the acclaimed Medea exhibited by Frederick Sandys (1829-1904) at the Academy in 1869, and then at the 1878 Exposition Universelle in Paris. Sandys's is just one of several Pre-Raphaelite images that might have inspired Waterhouse, including Burne-Jones's The Magic Circle (c. 1880) and Rossetti's vision of Jane Morris as Astarte Syriaca (1877), the powerful Near Eastern goddess of love and the moon, whose symbol was fire.

Beyond updating a type, this picture reflects Waterhouse's growing interest in occultism. The widespread perception that women made better mediums for supernatural communication gave them a degree of influence unimaginable in conventional religion. Describing this sorceress as engaged in 'a fearful secrecy with nature', Waterhouse's biographer Rose E.D. Sketchley wrote in 1909 that The Magic Circle 'belongs more closely to the artist himself. The picture denotes the attitude in which occultism is founded; the intensified sense of the power of the will, of its influence, seeing that is allied with them, over forces of destruction and renewal in the natural world'.

Published with Waterhouse's approval, Sketchley's interpretation increases the likelihood that the snake coiled round the sorceress's neck represents the ouroboros, the great serpent that encircles earth and symbolizes the cycle of life and death. The ouroboros was promoted by the internationally controversial Helena Blavatsky (1831-1891), co-founder of the Theosophical Society, whose teachings encompassed reincarnation and the evolution of magical and archaic symbols in world religions. Many spiritualists used séances to encounter ectoplasm, which Waterhouse suggests with amorphously brushed patterns within the column of smoke.

In these varied ways, The Magic Circle offers suggestive hints that Waterhouse inclined towards occultism. We cannot be certain of his intention, but we are certain that he returned to images of sorceresses and ceremonial magic through the rest of his career.

Setting aside his personal beliefs, The Magic Circle exemplifies Waterhouse's growing theatricality. The Academy observed that, 'the subject is an intensely dramatic one', and the caricaturist Harry Furniss concurred by providing Punch with a spoof of The Magic Circle showing Sarah Bernhardt stirring a cauldron with a giant spoon as a rat and theatre audience watch. One of the most famous people in the world during the 1880s, Bernhardt was known to attend séances and sleep in a coffin, and Waterhouse may have seen her 1879 exhibition in London which included the bas-relief she sculpted of herself, classically draped and open-mouthed, striding to crown busts of Shakespeare and Moliere. Furniss's association was further encouraged by the distinctive nose and unruly hair of Waterhouse's sorceress, which evoke Bernhardt's profile.

Waterhouse's painting technique here is also worthy of note. He and many other British artists had absorbed Impressionism not directly from Monet or Renoir, but as filtered through the Anglophilic French painter Jules Bastien-Lepage (1848-1884). The Magic Circle represents Waterhouse's earliest known experimentation with several of Bastien's strategies. Most obvious are changes in the consistency of paint and its application to suggest spatial recession and draw attention to the figure. Note, for example, the contrast between the scratchlike kindling in the hot fire and the thickly painted, virtually photographic forearm and feet of the sorceress. Behind her, Waterhouse emulated Bastien's grey and umber scenery, painted thinly and freely with a square brush. Together, the foreground and background 'dissolve' to enhance the sorceress's dramatic presence.

This technique was readily found in the annual exhibitions of the New English Art Club, a group of younger, French-influenced artists who formed in 1886, the very year The Magic Circle appeared at the more conservative Academy. Waterhouse's capacity to employ leading-edge techniques in a seemingly conventional composition marked him out, then as now, as a talent worth watching.