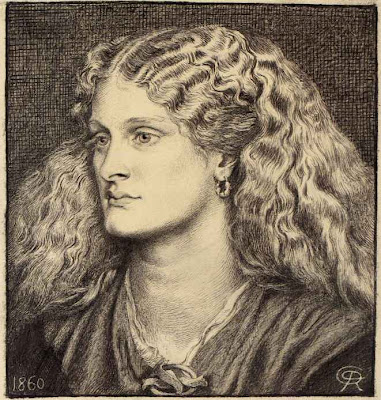 From the Collection of L.S. Lowry, R.A.

Annie Miller (1835-1925) was a girl of striking appearance and easy virtue who came from humble origins in a Chelsea slum. She sat to Holman Hunt for his Awakening Conscience (Tate Gallery), exhibitied at the Royal Academy in 1854, and he hoped to marry her when she had learnt to write and conduct herself in a ladylike manner. Before he left for the Holy Land in January 1854, he paid for her education and gave her a list of artists for whom she could sit. It did not include Rossetti, but she disregarded Hunt's instructions and was often Rossetti's model during the ensuing years, posing, among others, for Dante's Dream (1856; Tate Gallery), Cassandra (1861; British Museum), and Helen of Troy (1863; Kunsthalle, Hamburg). Virginia Surtees also lists six independent studies, including the present drawing.

Madox Brown described Annie as 'siren-like'. All the artists for whom she modelled, he wrote, were 'mad' about her, and this was certainly true of Rossetti. Indeed he seemed to go out of his way to arouse Hunt's jealousy by taking Annie to Bertolini's restaurant, Cremorne Gardens, and other dubious resorts. The affair would cause a permanent rift between the two Pre-Raphaelite Brothers.

Annie is frequently mentioned in the diary of G.P. Boyce, another of her admirers. On 21 January 1858 Hunt, long since back from the East but no nearer resolving his relations with Annie, called on Boyce. 'Having in prospect to marry Annie Miller,' Boyce wrote, 'after that her education both of mind and manners shall have been completed, he wished to destroy as far as was possible all traces of her former occupation, viz, that of sitting to certain artists'. Reluctantly, Boyce agreed to surrender a head study he had made of Annie, even though it was 'the most careful and the (one)... which I prize the most I have ever made'; but he must have wondered if the sacrifice had been worth it when Annie herself visited him on 22 December 1859 'in an excited state to ask me to recommend her to someone to sit to. She was determined on sitting again in preference to doing anything else. All was broken off between her and Hunt. I pitied the poor girl very much, by reason of the distraction of her mind and heart.'

Anxious not to cause any misunderstanding with Hunt, Boyce called on him that evening to tell him of Annie's visit and inform him that he intended to ask her to sit to him 'instead of to any stranger.' Hunt agreed it was the best course, and 'the interview was friendly throughout'.

Within a week Annie was sitting again to Boyce, 'looking more beautiful than ever,' and Rossetti was joining him to make a 'pencil study of her', now in the Birmingham Art Gallery (Surtees 355). Several more sittings are noted in the diary, after one of which, in March 1860, Boyce lent his model a copy of Wuthering Heights, evidence that her education, however neglected and patchy, was not negligible.

Annie made her last appearance in the diary on 16 June 1862 when Boyce saw her at the International Exhibition, 'looking as handsome as ever, (and) walking with a young man, rather a swell'. This was probably Thomas Ranelagh Thomson, the first cousin of a former lover, whom she married the following year. Long afterwards, Hunt was to meet her accidentally, 'a buxom matron with a carriage full of children, on Richmond Hill.' They stopped and talked, discovered that they were both now happily married, and Hunt admitted to himself that, traumatic as their relationship had seemed at the time, he could now forgive Annie's 'offence'.

Our handsome drawing is dated 1860 and must have been made not long after Annie began sitting again to Rossetti and Boyce at the end of the previous year. It shows her at the age of twenty-five, not twenty-one as the inscription indicates ('aetat XXI'). This suggests that she had lied to Rossetti about her age, perhaps in her anxiety to resume her career as a model.

The drawing belonged to the artist L.S. Lowry (1887-1976), a passionate devotee of Rossetti, and is not the first of the Pre-Raphaelite's works with this provenance to grace these Rooms. The 1877 version of Proserpine (private collection) was sold on 27 November 1987 (lot 140), making saleroom history by becoming the first Victorian picture to realise more than £1 million, and Pandora, a magnificent red chalk drawing of 1869, which still holds the world record price for a Victorian work on paper, followed on 14 June 2000 (lot 14). Lowry had acquired them repectively two years before and two years after he bought the present study.