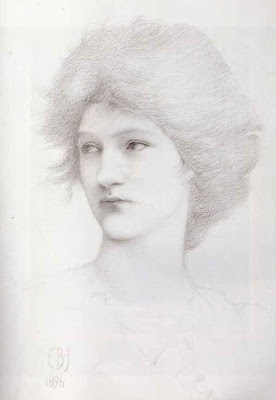 Olive Maxse was a young woman who served as Burne-Jones's model in the 1890s. They became keen correspondents; in one letter, which illustrates their close relationship, Burne-Jones wrote: 'A certain kind of silly rubbish has always helped me, deep down, as we are all face to face with enough solemnity - we can guess that much of each other with certainty even if we know nothing - so I shall be silly till you want me to be sad and then you shall have all the sadness that is in me' (M. Harrison & B. Waters, Burne-Jones, New York, 1973, p. 161).

One of the four children of Frederick Augustus Maxse (1833-1900), a naval officer and radical, Olive grew up under the tutelage of a succession of governesses after her parents seperated in 1877. Her younger sister, Violet (1872-1958), first married Lord Edward Herbert Gascoyne-Cecil (1897-1918), and secondly Sir Alfred Milner, later Viscount Milner (1854-1925). Her brothers were Sir (Frederick) Ivor Maxse (1862-1958), who became a leading First World War general and Leopold James Maxse (1864-1932), who rose to fame as a prominent journalist, subsequently owning and editing the National Review.

There are two similar portrait studies to the present drawing, and although the sitter is unknown in both, they bear a striking resemblance to our study. The first, in the Birmingham Museum and Art Gallery is dated 1895 and inscribed by the artist as being for The Sirens (Ringling Museum of Art, Sarasota, Florida), a picture begun in the 1870s but never completed. The second is dated and inscribed '1896/AVALON' identifying it as a study for one of the queens gathered around the dying hero in The Last Sleep of Arthur (1881-1898), now in the Museo de Arte at Ponce, Puerto Rico (see C. Wood, Burne-Jones, London, 1998, p. 126).

Burne-Jones's admiration for Maxse was demonstrated when she mentioned to him that a number of her fellow students at the Académie Julian in Paris had suggested that her features resembled those of a Burne-Jones model. He replied: 'Those students at Julian's conceived a high ideal of me if they think they are at all like any heads I paint - I hope it's a little true - for I think you beautiful - and an old artist may tell a young girl that without hurt or blame - and when you come back I shall claim my privilege of drawing from you' (Harris & Waters, loc. cit.).