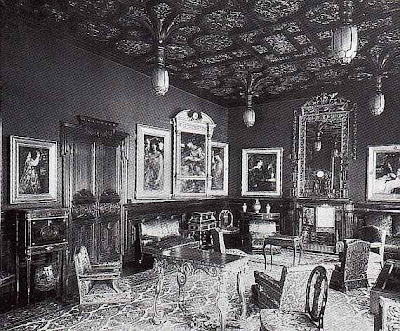 at Princes's Gate, London
photographed by Bedford Lemere
showing part of his collection of the works of Rossetti and Whistler. You can identidy Lady Lilith and Veronica Veronese. Hanging the paintings in a single row was a new idea.
Frederick Leyland was a self-made Liverpool ship-owner, wealthy and influential. He generously patronized contemporary artists, including a number of Whistler’s friends, and for this earned the nickname the ‘Liverpool Medici’. Leyland was fond of collecting art and music, on his return home at night he would practice scales on the piano. Whistler was first introduced to Leyland by Rossetti. Since the autumn of 1869, Whistler was a regular visitor at Leyland’s manor house, Speke Hall , eight miles from Liverpool, where his interest in etching revived and he executed plates of Liverpool docks and of Leyland’s family. Full-length portraits of both husband and wife were commissioned and work continued on these in both Liverpool and London:
Posted by Hermes at 6:00 AM