William Morris - The Well at the World's End. Kelmscott Press, 1896 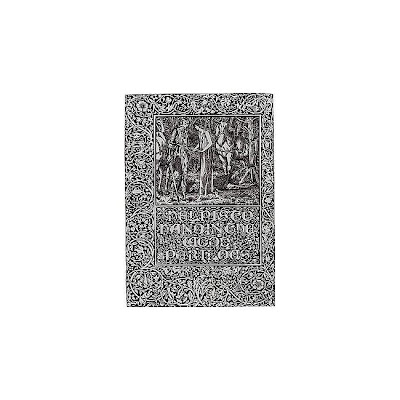 large 4to, limited to 308 copies of which this is one of 300 on paper, from the library of william michael rossetti with inscription in Rossetti's hand noting presentation of the volume by S.C. Cockerell: "W.M. Rossetti / from S.C. Cockerell / 1897."' printed in red and black, 4 wood-engraved illustrations after Edward Burne-Jones, ornamental woodcut captions to illustrations, borders and initials original limp vellum, silk ties, binding slightly soiled

In addition to the note of presentation, Rossetti writes on the front free end-paper "See the note in Sidonia the Sorceress / (Kelmscott Press). / W.M.R. / 1904." Apparently W.M. Rossetti's copy of this title was annotated as follows: "...after my Brother's death a painting by Wm Morris, named Queen Genevere, remained in my hands - my Brother's property. Then it got mislaid for a long while - On its recovery I assented to the request of M's Trustees that it might be handed over to them - they then, thro' Mr. Cockerell, presented me with this Kelmscott Press Book, and 2 others." The three books Rossetti received were therefore The Recuyell of the Historyes of Troye, Sidonia the Sorceress and this copy of The Wells at the World's End.
Posted by Hermes at 6:00 AM