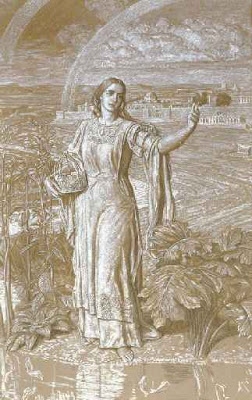 signed with monogram (lower left)
silverpoint heightened with white and with scratching out, brown prepared paper
17 x 10¾ in. (43.2 x 27.5 cm.); and seven letters and a copy of Pearl: An English Poem of the Fourteenth Century, edited by Israel Gollancz and with his parallel version in modern English. London: David Nutt, 1891, 8vo, collotype frontispiece after William Homan Hunt, title in red and black, original boards, top edge gilt, contemporary purple velvet chemise trimmed with gold braid and glass beads in contrasting purple and pink. Presentation copy, front blank inscribed to Edith Holman Hunt 'With the Editor's/grateful regards/May 1891'. Number 50 of 50 copies. The chemise was undoubtedly intended to give the book a medieval appearance, suited to its text.

Commissioned from the artist by Israel Gollancz (1863-1930) and thence by descent.

This silverpoint illustration was first exhibited at the Royal Society of Painters in Watercolours in December 1890, with the following quotation in the catalogue from Part V of Pearl: An English Poem of the Fourteenth Century, Edited with a Modern Rendering by Israel Gollancz (1891):

'O Pearl!' quoth I, 'with Pearls bedight;
Art thou my pearl? - of me so lone
Regretted and through the night bewailed,
Much longing have I borne for thee.'

'That jewel, then, so fair begemmed,
Veered up her visage, raised her grey eyes,
Set on her crown of orient pearls,
And gently thus she spake.'

Hunt's drawing was first reproduced as the frontispiece to Gollancz's 1891 edition of the poem. Pearl (MS. British Library) was written in the late 14th Century in north-west Midlands dialect, but its author has never been definitively identified; what is generally agreed is that the same poet was responsible for Sir Gawain and the Green Knight.

The Pearl Maiden of the poem is a vision of a deceased child, usually interpreted as the narrator's daughter, in a gleaming white tunic embroidered with pearls, and breastplate of a 'spotless pearl' set there by Christ 'in token of peace'. Hunt, in his 1861 illustration to Richard Chevenix Trench's 'The Lent Jewels', had already dealt with a poem employing the metaphor of gems for dead children. But the artist's vision of the afterlife in The Triumph of the Innocents (Liverpool, Walker Art Gallery), which the young Cambridge scholar Israel Gollancz could have seen at the Corporation of London Art Gallery in the summer of 1890, is more likely to have prompted the commission. Its exact circumstances are unknown, so we cannot tell whether Gollancz or Hunt chose the exact verse to be illustrated. This is in fact the preceding verse to that quoted in the RWS catalogue:

BEDIGHT with pearls, that precious thing
came down the shore on that yonder bank;
from here to Greece was no gladder man
than I, when she stood at the water's edge.
She was nearer to me than aunt or niece,
and so much the more was my joy.
She proffered me speech, that creature rare,
bending low in womanly wise;
her crown of richest worth she doffed,
and hailed me with obeisance blithe
well was me that e'er I was born
to answer that sweet one, with pearls bedight.

At this point there is no city backdrop to the scene, but the narrator is later accorded a glimpse of the New or heavenly Jerusalem, as beheld in Revelations by St John from Mount Zion. This gave Hunt the cue to incorporate in his drawing city walls reminiscent of the Old Jerusalem, with the mosque of the Dome of the Rock behind Pearl's outstretched arm. The fishes in the foreground of the silverpoint are similar to those decorating the lower part of the 1889 frame for May Morning on Magdalen Tower (Lady Lever Art Gallery, Port Sunlight); here they may well represent Christ's presence. The double rainbow in the background is not mentioned in the poem but is a potent symbol of hope, deriving from God's covenant with Noah in the Old Testament.

Pearl was extensively reviewed by F.G. Stephens in the Athenaeum of 6 December 1890: 'The face, its dress, contours and gracious lines, are, indeed, beautifully wrought; as with the background, so with the modelling throughout, the entire piece was produced with the delicate research of a gem engraver; but...the face, on which all the passionate pathos of the design's suggestion should have been concentrated, is neither fair, nor even, in any respect, fine. It is indeed, and technically speaking, the sole failure in point of sentiment and execution in a very ambitious and highly accomplished drawing - one of the most thoughtful pieces of work in the exhibition'. Stephens would have been well aware that the model for Pearl was Hunt's second wife - he held Edith Holman Hunt responsible for the breakdown of his relationship with the artist in 1880, and willingly seized the chance of attacking her in this oblique way.

In the preparatory drawing for the silverpoint, the maiden is certainly younger and, according to Oliver, son of Sir Israel Gollancz, this was more in accordance with his father's wishes. Hunt was not altogether satisfied with the final drawing, and in a letter of 25 July 1893 to fellow artist William Blake Richmond revealed that 'I look upon [it], as I often do upon completed work, as at last just having taught me how I ought to have begun it - and as thus but the settlement of the first intention'. The critic of the Daily Telegraph thought it 'a work which is evidently the finished basis for another more elaborate composition, one, however, which cannot surely be more beautiful than this delicate union of poetry and painting'.

Hunt's earliest silverpoint, of the interior of a gondola, dates from 1869. The technique was first employed in the 15th Century, and is very tricky to master, since the marks made by silver wire on the prepared surface are indelible. Hunt was never prolific in the medium, and tended to use it for portraits of his family rather than for fully-fledged compositions. Pearl is by far his most ambitious work in this medium. Silverpoint may have been used because it could be photomechanically reproduced more clearly than graphite and less harshly than ink. The extensive use of white heightening adds depth of tone. This suggests that Hunt knew that the technique to be employed for the published illustration was collotype, which is ideally suited to conveying tonal variations.

The present lot includes Edith Holman Hunt's copy of Gollancz's 1891 rendition of Pearl, with its collotype frontispiece reproducing our drawing, as well as several letters written by Hunt and his wife Edith to Israel Gollancz. Edith's letter of 10 January 1927 reveals: 'I devised & made the covering of the volume wh. I hope you may like'. It is of deep purple velvet with gold embroidery and coloured glass which has the effect of enclosing a poem about a jewel in a precious jewel case.

Gollancz and the Holman Hunts were close friends, and in his letter of 25 July 1893 to Blake Richmond Hunt described the young academic as 'a dear fellow - and very much unlike the herd' (MS. RA Archives). Four letters in the present lot show how highly Hunt regarded Gollancz's editorial skills, for on 27 May 1904 he entrusted him with the mammoth typescript of his memoirs, Pre-Raphaelitism and the Pre-Raphaelite Brotherhood, 'for your better judgement'. Gollancz was by now Professor of English at King's College, London, as well as the first Secretary of the British Academy.

At the time of Hunt's death Gollancz was also President of the Ancient Order of Maccabeans, an informal group of Anglo-Jewish intellectuals and professional men engaged in philanthropic activities, of which Hunt was an honorary member. Gollancz wrote to Edith Holman Hunt on 31 October 1910: 'The Society will ever regard it with pride that it was their privilege to number him among those who have helped forward our sacred cause'. On 6 January 1896 Hunt had written to the Jewish Chronicle recommending the establishment of a Jewish state in Palestine 'for the poor and oppressed of your people'. This was a month before Theodor Herzl's book Der Judenstaat was published, and in one of his three letters of August-September 1905 to Times Hunt recalled meeting Herzl 'some 12 years ago' to propound such a scheme. The letters to Times, prompted by the recent passing of the Aliens Bill, demonstrates Hunt's concern for the plight of Eastern European Jews fleeing from religious persecution: 'I would urge that the honour of our Empire has ever been bound up with the protection of the innocent refugee, and this we must never abandon'. Gollancz's 1910 letter continued: 'Jews, far and wide throughout the world, have every reason to hold his memory in most grateful reverence. We may also say of him ''A very prince has fallen in Israel''. But his work, in which his spirit lives, and in so many cases the spirit of the Holy Land he loved with so passionate a devotion, will long remain a source of inspiration to those that come after' (MS. Kenneth Spencer Research Library, University of Kansas).

We are very grateful to Dr Judith Bronkhurst, author of the forthcoming catalogue raisonné of Hunt's works, for providing this catalogue entry
Posted by Hermes at 6:00 AM

You are helping me to rethink my disdain for Holman Hunt. Thank you!

I have mixed feelings about him because of his choice of subjects but he obviously had real talent but to my mind lacked the imagmation of Rossetti and (early) Millais, or the mythology of the later Burne-Jones.