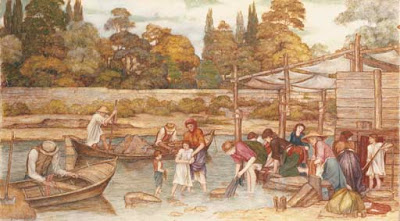 Scenes of everyday life occupy a central place in Stanhope's oeuvre, and provide a fascinating counterpart to the allegorical and mythological subjects with which he is primarily associated. He started to paint these genre scenes in the late 1880s some years after settling at the Villa Nuti in Bellosguardo. His 1888 contribution to the Grosvenor Gallery was a major departure from his previous exhibits: Pine Woods Viareggio (sold in these Rooms, 28 November 2001, lot 5, £198,000) depicts Italian peasant girls gathering pine cones, needles and wood. A number of paintings inspired by simple working life were to follow, and the present watercolour would seem to belong to this series which includes The Women of Sorrento (sold in these Rooms, 28 November 2001, lot 8).

The Washing Place captures the rhythms of work, as the women wash and scrub their clothes. The influence of Burne-Jones is very much evident in the figures, although Stanhope had a unique and sure technique quite different from the other Pre-Raphaelites with whom he associated. Having been educated at Rugby and then at Christ Church, Oxford, Stanhope studied under G.F. Watts before working on a series of murals for the Oxford Union in collaboration with Rossetti and Burne-Jones.

Stanhope's enduring interest in mural painting influenced his technique throughout his career. He began to use egg tempera during the 1870s and helped to found the Society of Painters in Tempera in 1901. The bold linearity of his work and his even distribution of warm colour across the composition show the influence of fresco painting, something which became more pronounced after his move to Italy.

Although he always maintained a close relationship with Burne-Jones, Stanhope's genre scenes represent a move away from the figurative elements of Pre-Raphaelitism. Burne-Jones remarked that Stanhope's 'colour was beyond anything the finest in Europe; and an extraordinary turn for landscape he had too.'
Posted by Hermes at 6:00 AM