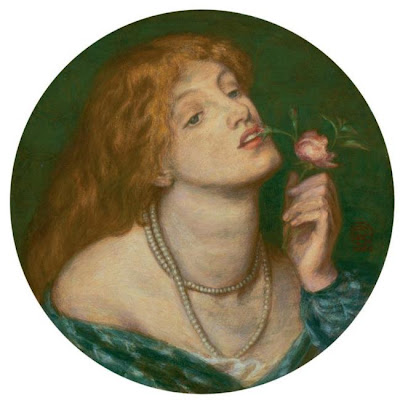 mixed media on paper laid down on panel

Rossetti painted the first Belcolore in 1863 on panel and completed this second and only version in 1868. The painting depicts the literary figure Monna Belcolore, a village woman of legendary beauty described in Giovanni Boccaccio's Decameron (circa 1348-1353). Boccaccio's late-medieval, elaborate stories provided the quintessential source for Pre-Raphaelite artists in search of opulent histories with romantic subjects untouched by the Renaissance painters.

In this composition, Rossetti depicts a female model wearing a delicate strand of pearls and holding a pink rose in her left hand. Her neck, with its characteristically Aesthetic movement elongated line, arches into a face filled with a dreamy, ambiguous longing. Brancaccio's account does not allow for the details of Monna Belcolore's identity, and Rossetti leaves the viewer wanting to know more, for whom does the rose sensuously touch her lips?
Posted by Hermes at 1:00 PM

She is lovely! It is always nice to find something you have not seen before by an artist you admire. Thank you for sharing it and the others here.
Kat

It was new to me too - perhaps hidden in America. I share your admiration.

I love the rose sensuously touch her lips... :)

I wonder who she was? Most striking looks.