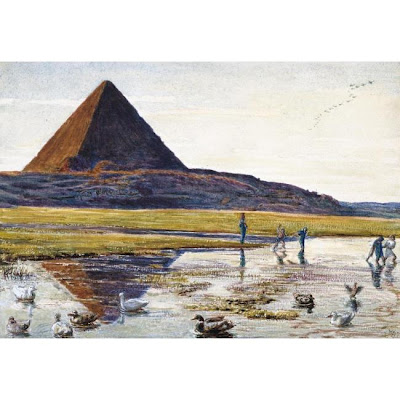 Holman Hunt’s watercolour shows the Great Pyramid of Cheops, at Giza, viewed from the east. Immediately in front of the main structure are seen the two smaller shapes of the so-called Queens’ Pyramids. The foreground consists of an expanse of water, through which figures wade, and with ducks swimming. The other Giza Pyramids, those of Chephren and Mycerinus, as well as the Sphinx, are out of view to the composition’s left side.

Hunt left London in January 1854, Palestine being his intended destination. His artist friend Thomas Seddon had departed a month or so earlier, with the plan that they should meet in Cairo before travelling on to the Holy Land. They were to camp at Giza, as Seddon explained to his fiancée Emmeline in a letter of 11 February: ‘We intend, in seven or eight days, to take a tent and two camels, with their drivers, and a servant to cook, and camp out by the Pyramids … By this plan we shall economise our hotel bill’ ([John Pollard Seddon], Memoir and Letters of the late Thomas Seddon, Artist. By his Brother., London, 1858, p.43). In 1857 Hunt produced an etching showing the encampment at Giza he had shared with Seddon in 1854 (fig.1). Hunt later spent some weeks working in Cairo, but returned to Giza in April. Of the drawings of Egypt that Hunt made in the course of these two desert sojourns in the early part of 1854, the best known is that entitled The Sphinx, Giza, looking towards the Pyramids of Saqqara (Harris Museum & Art Gallery, Preston; shown in the exhibition Pre-Raphaelite Vision – Truth to Nature, Tate Britain, 2004, catalogue no.58). In May 1854 Hunt, still accompanied by Seddon, moved on to Palestine, where Hunt painted The Scapegoat (Lady Lever Art Gallery, Port Sunlight).

The difference of approach to the desert landscape and ancient monuments taken by Holman Hunt and Seddon is interesting. Of the two, Seddon’s views are more topographically informative, but also more pictorially conventional. By contrast, Hunt looked for vantage points that allowed him to simplify and dramatise the extraordinary scenery.

The landscape, the like of which he had never seen before, seems to have made a most curious impression upon him. In a letter to John Everett Millais of 16 March 1854, Hunt wrote somewhat disparagingly of it as a subject for art. Of the wider landscape, however, Hunt could bring himself to say that ‘the desert is beautiful’ (W. Holman Hunt, Pre-Raphaelitism and the Pre-Raphaelite Brotherhood, two volumes, 1905, I, p.380). Hunt saw the landscape in aesthetic terms of shape and colour. The beauty and originality of the present watercolour, and of the other desert drawings that Hunt made in 1854, belies his apparent lack of enthusiasm for what he saw there.

The picture was in two distinguished collections. Sir John Pender also owned Mercury and Herse by J.M.W Turner (lot 40), and information on him as a collector is contained in the catalogue entry for that lot. William Brockbank was on the council of the Royal Manchester Institution from 1874-1880, becoming Vice-President in 1881. He commissioned Ford Madox Brown to paint Cromwell on his Farm (National Galleries and Museums on Merseyside, Lady Lever Art Gallery, Port Sunlight), which was exhibited at the Manchester Academy of Art in 1874.
Posted by Hermes at 6:00 AM