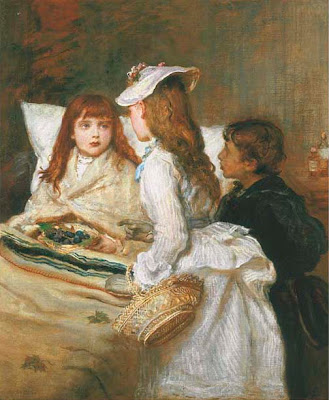 The picture was exhibited at the Royal Academy in 1876, when Millais was forty-seven. M.H. Spielmann stressed the insight and acute psychology displayed in the treatment of the principal figure. 'In the invalid herself', he wrote, 'will be recognised a wonderfully truthful rendering - not only the appearance of slow recovery, but also the observation that has caught the timidity with which a young convaslescent usually first receives visitors'. Writing in 1898, he also felt that the picture 'suffered through the style of the visitor's dress, now out of all fashion', but that is hardly a problem that is likely to worry us today.

The picture's genesis was unusual. In his painting The North West Passage, exhibited at the R.A. in 1874, Millais had originally intended to show a girl and a boy turning a globe in the upper right corner. Eventually, however, he decided to simplify the composition by focusing on the figures of the old mariner and his daughter. The area of canvas on which the children had been paintined was cut out, and onto the piece inserted to take the flag which appears in the picture today. Getting Better was painted on the discarded piece of canvas retaining the figures but altering them to form a completely new subject.

In developing his new theme, Millais seems to have been thinking of his two earlier accounts of children in bed, Sleeping and Waking, which had been exhibited together at the RA in 1867. The subject of convalescence was popular in Victorian art, being not only relevant to an age which suffered so much from ill health and high mortality but perfectly tailored to the fashion for emotive and sentimental themes. Millais himself treated it again in The Convalescent (Aberdeen Art Gallery), a work of 1875 which must have been in progress at the same time as Getting Better. Tissot's The Convalescent is another obvious comparison, although his protagonist, typically, is a young woman and the sentiment is very different.

The model for the invalid is Getting Better, who also appears in The Convalescent, has not been indentified, but for the other figures Millais followed his frequent practice of getting his own children to sit. His third daughter, Alice, posed for the elegantly dressed visitor, and his youngest son, John, for the boy. Alice was now fourteen. Born in 1862, she had already modelled for the child in Sleeping, and in later life was to be a fine pianist, and an intimate friend of Elgar. In 1886 she married Charles Stuart Wortley, a barrister and Conservative M.P. who was raised to the peerage in 1816. John Millais was born in 1865, so Getting Better shows him at the age of eleven. Later an artist and keen sportsman, he is remembered today as the author of his father's official biography, published in 1899.

Of the picture's early owners, perhaps the most remarkable was Sir Joseph Robinson. Born in the Cape Colony in 1840, Robinson made a fortune out of mining in South Africa. He moved to England in 1893, and the following year took a lease on Dudley House, a mansion in Park Lane. The house had a large vaulted picture gallery, and Robinson began to buy Old Master and modern paintings. He probably acquired Getting Better from its previous owner, Humphrey Roberts, at about this time, and he would soon be buying other Millais' from the dealer J.C. Wertheimer, including the famous Cherry Ripe (1879) and The Old Garden (1888) now in the Lloyd Webber Collection. In 1910, however, Robinson, aged seventy, decided to return to the Cape. His pictures were put into store in London, and did not re-appear until the collection, including Getting Better was exhibited at the Royal Academy in 1958.
Posted by Hermes at 6:00 AM