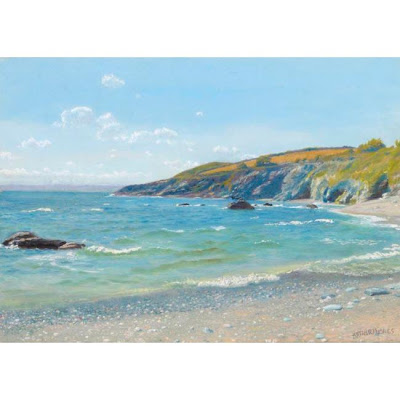 According to Leonard Roberts Perran Point was painted around 1895 at a time when Arthur Hughes painted several charming marine studies in Cornwall, including Newquay Headland From the Warren, The Towan, Newquay and Saint Agnes' Head, Cornwall. In each of these small panels Hughes captured the rugged wilderness of the Cornish coast in times of tranquility when the cliff-tops are covered by a verdant wealth of grass and salt-loving flowers and the sea is a beautiful shade of azure blue. His studies of ocean from the vantage of the cliffs found its most impressive expression in the two versions of Threads of Fate in 1887 and 1889 in which a young women is mending the nets on a rock far above an inlet where a solitary fisherman is rowing into shore. Around 1889 Hughes also painted the similar painting A Cornish Welcome in which two young children wave from the cliff tops at the unseen fleet below.

Hughes continued to paint these views throughout his life and clearly found great pleasure in landscape painting, for which he had a great talent. Although he is now well known for his Pre-Raphaelite romatic paintings of knights and damsels, his quality as a landscape painter is perhaps not as recognised as it should be.
Posted by Hermes at 6:00 AM

This is a very beautiful painting. Arthur Hughes has captured the special Cornish light perfectly.

This is very 'modern' looking - I've seen so many similar (though not as good) in Cornwall.