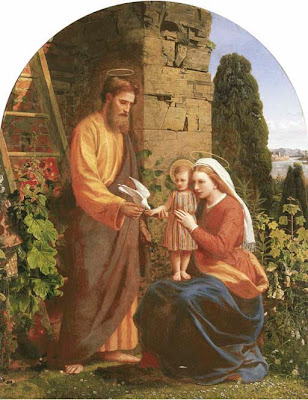 with inscription 'This is to certify that this picture of the/Holy Family was painted by my father/the late James Collinson, one of the/original PreRaphaelite brothers and/later a member of the society of British/Artists who had a gallery in Suffolk Street./Robert V. Collinson.' (on an old label on the reverse)
oil on canvas, painted arch
43½ x 33½ in. (110.5 x 85.1 cm.)


James Collinson was one of the founder members of the Pre-Raphaelite Brotherhood, and was briefly engaged to Rossetti's sister, Christina, in 1849-50. He was also intensely religious, and abandoned painting for the Catholic seminary at Stoneyhurst in 1851. He left his novitiate in 1854 and resumed painting but never lost his religious fervour.

The subject is conceived as the Return from the Flight into Egypt, a theme often treated by the Old Masters. Christ is no longer an infant and the Holy Family are being visited by the Holy Spirit in the form of a dove. An Egyptian temple can be glimpsed in the background, on the far bank of the Nile. The foreground however is scattered with plants more often found in an English country garden: hollyhocks, foxgloves and dandelions can be be seen on a lawn strewn with daisies while a sycamore, and a cedar of Lebanon are included, as well as a beehive to the left. These are painted with extraordinary care, and though the painting is executed in 1878, surely betrays Collinson's sympathy with the Pre-Raphaelite movement started thirty years previously.

The painting hung for many years, along with others by Collinson, in the convent of the Sisters of Charity in Manchester Square, Marylebone.
Posted by Hermes at 1:00 PM