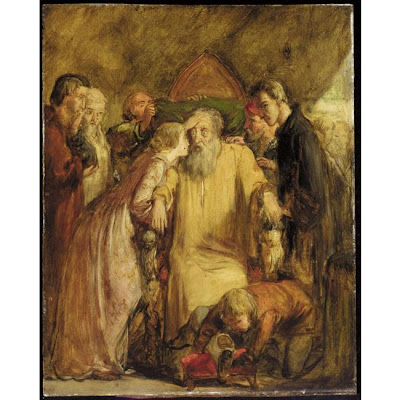 inscribed on a sheet of writing paper attached to the backing: 10 March 91 The little sketch of Lear is my work when I was a lad/... J E Millais

This early oil painting by Millais shows the moment in Shakespeare’s play when King Lear – his madness abating – sees and recognises his daughter Cordelia. The rich old-masterly colouring and the emphatic characterisation of the figures suggest that Lear and Cordelia was painted in the late 1840s, during a period in which Millais was exploring different historical painting styles. Millias was strongly drawn to literary subjects in his early career. Drawings and paintings of Shakespearean themes occur from about 1848 onwards, the first being an oil sketch for The Death of Romeo and Juliet (Manchester City Art Gallery). A year later, after the formation of the Pre-Raphaelite Brotherhood, he painted Ferdinand and Ariel (Tate). Millais' particular interest in subjects from King Lear was shared, and perhaps to some degree indebted to, his friend Ford Madox Brown, who had begun a painting in 1848, also inspired by act 4, scene 7 of the play (Tate).
Posted by Hermes at 1:00 PM