Simeon Solomon - The Angel of Children 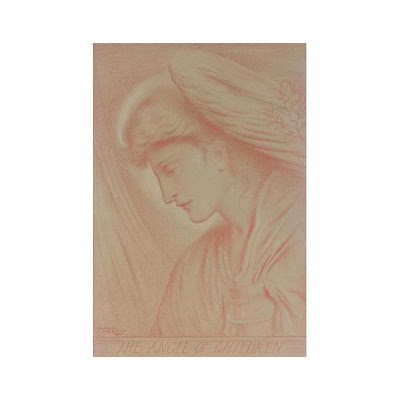 Simeon Solomon's conception of beauty was based upon the sensual Italianate features of Rossetti's later 'Venetian' canvases of women, but conveys a gentler mood of reflective reverie and contemplation, less overtly sexual and predatory than Rossetti's sirens. One of the most talented and tragic of all the artists who were inspired by Rossetti's pictures of the 1860s.

One of Solomon's greatest admirers was Oscar Wilde, who regretted having to part with the pictures he had collected, reproaching Alfred Douglas in his famous poem De Profundis, for allowing his Solomon drawings to be taken from him. Burne-Jones was another great admirer, who said of Solomon's ability to draw 'You know Simeon, we are all schoolboys compared to you!' (Lionel Lambourne, Solomon; A Family of Painters, 1986, pg 24). Sharing the same love for visionary beauty and with equal talents as draughtsmen, Solomon and Burne-Jones enjoyed one another's company and became close friends and for a time Solomon enjoyed the friendship of the bohemian Pre-Rapahelites and Aesthetics who lived in and around Bloomsbury, Rossetti, George Price Boyce, Albert Moore, Edward Poynter and Henry Holiday. Rossetti and Burne-Jones were two of the few friends who sympathised with Solomon after his scandal in 1873 and for a time some of his friends tried to help him. One of Solomon's most intimate friendships was with the poet Charles Augustus Swinburne, and it was partly the influence of his richly decadent poetry which, combined with the imagery of Rossetti and Burne-Jones and the symbolism of the Aesthetics, completed the formation of Solomon's genius as a visionary unlike any other before him.

'The Angel of Children' is a wonderful example of Solomon's ability to create haunting images of diffused and enigmatic visions of men and women as though glimpsed through the veil of a dream. The angel is not one of the religious angels of the Lord's servitude and glory, but a Symbolist protectress of children, a personification of an unseen being who watches over the innocent.
Posted by Hermes at 6:00 AM