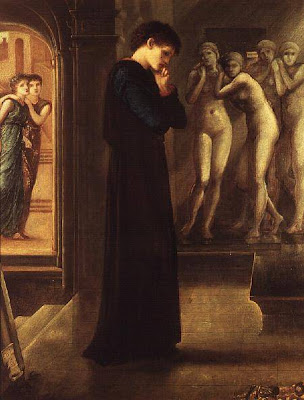 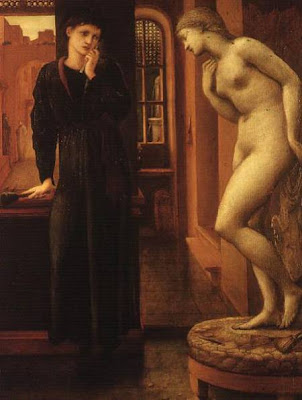 Four paintings based on an episode from William Morris' cycle of epic poems, 'The Earthly Paradise'. Antonio Corsi sat as the model for Series One. In Series One, there are four sculptural figures in the background representing the Four Seasons or Horae; in Series Two, there are only three, now the Three Graces. The first series is currently in the collection of Lord Lloyd-Webber.

The paintings were intended as an illustration to Morris’ poem ‘Pygmalion and the Image’, published in the first volume of The Earthly Paradise (1868). Burne-Jones produced two series of paintings on the subject and drawings) – the first in 1868-70 (Birmingham Museum and Art Gallery: 1903P23; 1903P24; 1903P25; 1903P26) and the second in 1875-78 (Andrew Lloyd Webber collection), both in oil. The two sets each consist of four paintings and tell the story of Pygmalion, the Cypriot sculptor who created a statue of an ideal woman as no model of female perfection existed in real life. The statue was then so beautiful that he fell in love with it and asked Venus for it to come to life. Venus answered his prayers, granting the statue the gift of life, leaving Pygmalion and his statue united.

It was intended that each poem in The Earthly Paradise would be illustrated with wood engravings in the style of fifteenth-century book illustration and that the volume would be printed at the premises of Morris, Marshall, Faulkner and Co. at Queen Square, Bloomsbury. Georgiana Burne-Jones’ Memorials recounts the optimism and excitement of Morris and Burne-Jones as they planned the project. However, the project was abandoned and the only completed set of illustrations for The Earthly Paradise was that for ‘Cupid and Psyche’ (in the BMAG collection), the first of The Earthly Paradise tales to be written, constituting seventy of the more than one hundred illustrations Burne-Jones made for The Earthly Paradise. In the end, only one illustration featured in the final publication: an engraving by Burne-Jones, of three young maidens printed on the title page. Birmingham Museum has twenty-two drawings for ‘Pygmalion and the Image’ in total, and there are three more at the William Morris Gallery, Walthamstow.

The story of Pygmalion originally appears in Book Ten of Ovid’s Metamorphoses (AD1-AD8). Here, Pygmalion is a Cypriot sculptor who lives alone in celibacy after shunning society and, in particular, the women of Cyprus, whom he views as debauched. Believing no human model of perfection exists, Pygmalion sculpts his own perfect statue, in later versions named Galatea, which he then falls in love with. Frustrated that the statue remains inanimate, Pygmalion prays to Venus, who brings the work to life. The couple then have a child, Paphos. Morris takes most of these details as the basis for his poem, the preamble to which is as follows:

A man of Cyprus, a sculptor named Pygmalion, made an image of a woman, fairer than any that had been seen, and in the end came to love his own handiwork as though it had been alive; wherefore, praying to Venus for help, he obtained his end, for she made the image alive indeed, and a woman, and Pygmalion wedded her.

Questions about Pygmalion Fashioning the Image:

1. The following passage from Morris’s ‘Pygmalion and the Image’ describes Pygmalion creating his sculpture:

Unto the chisel must he set his hand,
And slowly, still in troubled thought must pace,
About a work begun, that there doth stand,
And still returning to the self-same place,
Unto the image now must set his face,
And with a sigh his wonted toil begin,
Half-loathed, half-loved, a little rest to win.
The lessening marble that he worked upon,
A woman's form now imaged doubtfully,
And in such guise the work had he begun,
Because when he the untouched block did see
In wandering veins that form there seemed to be,
Whereon he cried out in a careless mood,
“O lady Venus, make this presage good!
“And then this block of stone shall be thy maid,
And, not without rich golden ornament,
Shall bide within thy quivering myrtle-shade.”
So spoke he, but the goddess, well content,
Unto his hand such godlike mastery sent,
That like the first artificer he wrought,
Who made the gift that woe to all men brought.
And yet, but such as he was wont to do,
At first indeed that work divine he deemed,
And as the white chips from the chisel flew
Of other matters languidly he dreamed,
For easy to his hand that labour seemed,
And he was stirred with many a troubling thought.
And many a doubt perplexed him as he wrought.

How does Burne-Jones’ drawing operate as an illustration to Morris’ poem? Which aspects of the narrative does Burne-Jones choose to illustrate and which does he omit in order to condense Morris’ verse into one image?

The drawing perhaps captures some of Pygmalion’s initial hesitancy, suggested by Morris. It also shows the statue as nearly complete, the shape having mostly emerged from the block, as seen near the bottom of the statue. The marble chips on the floor show the work that has gone on, although they are not literally flying from the chisel, as Morris describes.

2. The tale of Pygmalion is a classical one, first being written about in Ovid’s Metamorphoses and drawing on existing fragments of other classical stories. How do the architectural details and Pygmalion’s appearance contribute to a classical setting? Or do they depart from it?

Pygmalion’s clothing seems to be more medieval than classical but the sculptures in the background look Greco-Roman. Again, this is not an accessible ‘picture’ of a classical artist and instead appears to be more of an imagined scene. The mix of classicism and medievalism would also fit with the source text, The Earthly Paradise, which combined classical tales with medieval ones. 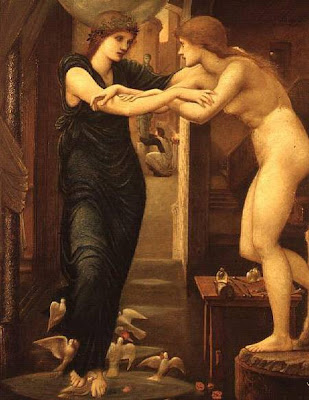 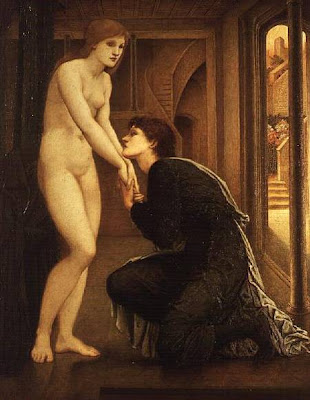 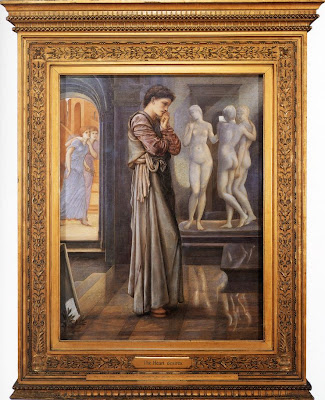 The scene of Pygmalion sculpting does not appear in Burne-Jones’ series of paintings Pygmalion and the Image; The Heart Desires shows Pygmalion deep in thought, perhaps conceiving his sculptural ideal, whilst the following painting, The Hands Refrains, shows Pygmalion having finished his creation. 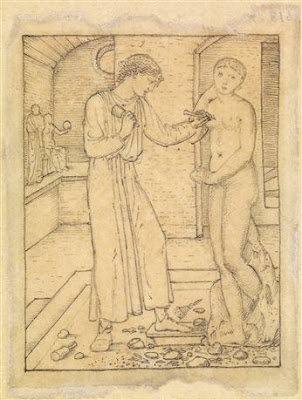 The drawing shows Pygmalion in his studio at work on his statue, which is almost complete. He holds a mallet and a chisel and further tools are on the floor (another mallet and a brush for polishing). There are two statues in the background, one of a cloaked standing man and one of a seated woman holding a sphere or possibly a discus or mirror.