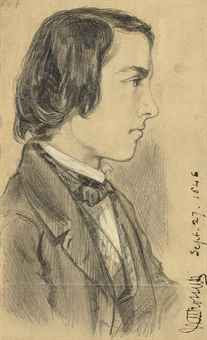 William Michael Rossetti and by descent in his family to the present owner.

It is true that when the latter drawing was included in Dante Gabriel's memorial exhibition at the Burlington Fine Arts Club in 1883, William Michael described it in the Art Journal as 'the only portrait, of a tolerably accurate and detailed kind, that I remember his ever taking of me'. But the writer goes on to say that 'there [were], however, one or two slight sketches besides'. One of these must by the present drawing. 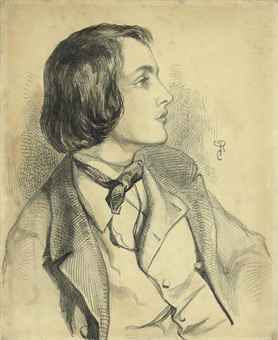 FROM THE COLLECTION OF A DESCENDANT OF WILLIAM MICHAEL ROSSETTI (LOTS 1 - 29)
Lots 1 to 29 all belonged to William Michael Rossetti (1829-1919), the younger brother of the artist Dante Gabriel Rossetti, and have descended through his family to the present owner. Indeed two portrait drawings (lots 11-12) are by William Michael himself, and one (lot 28) by his wife, Lucy, the elder daughter of Ford Madox Brown. William Rothenstein, who painted William Michael's portrait (National Portrait Gallery) in 1909, recalled in his reminiscences, Men and Memories (1931), how his sitter's house in Primrose Hill, 3 St Edmund's Terrace, 'was full of paintings and drawings by Dante Gabriel and Ford Madox Brown ... he [also] had countless small drawings by his brother put away in drawers, which he would bring out from time to time'.

However, in a few cases the ownership of the drawings can be traced back to members of the Rossetti family from whom William Michael evidently inherited them. Lot 1, for example, was lent by his mother to Dante Gabriel's memorial exhibition at the Burlington Fine Arts Club in 1883. She also owned the strange drawing by 'Peppino' Maenza of Dante Gabriel (lot 16), and both this and the even earlier portraits of the Rossetti children by Filippo Pistrucci (lot 17) are recorded as having belonged to Christina Rossetti after her mother's death in 1886. Lastly, the drawings by H.T. Dunn (lot 29) and Lizzie Siddal (lots 18-21) were undoubtedly owned by Dante Gabriel. The Dunn is almost certainly the watercolour that G.P. Boyce recorded being shown by Rossetti in November 1869, and the Siddals would have been among the works by his wife that Rossetti clung to so devotedly following her tragic death on 11 February 1862. Indeed the two most substantial drawings (lots 18 and 20) were possibly among the examples of her work with which he hung the drawing-room on moving to 16 Cheyne Walk the following October.

We are grateful to Virginia Surtees for her help in preparing the following catalogue entries. References to 'Surtees' indicate her book The Paintings and Drawings of Dante Gabriel Rossetti: A Catalogue Raisonné, Oxford, 1971.

William Michael Rossetti (1829-1919) was Dante Gabriel's slightly younger brother. Though a civil servant by profession, he was a member of the Pre-Raphaelite Brotherhood, formed in 1848, edited its short-lived journal, The Germ, and remained closely connected with the movement as eye-witness and analyst. Indeed, without his indefatigable chronicling, our knowledge of Pre-Raphaelitism in general, and the Rossetti family in particular, would be infinitely the poorer.

As a prolific art-critic, editor and literary historian, William Michael also made a significant contribution to the wider culture of his time. Oscar Wilde paid tribute to his 'great literary influence and eloquent pen'. The writer and his wife Lucy, the elder daughter of Ford Madox Brown, have been the subject of a recent biography by Angela Thirlwell (William and Lucy: The Other Rossettis, Yale, 2003).

This fine drawing is undated but Marillier, followed by Virginia Surtees, assigned it to 1846, two years before the formation of the Pre-Raphaelite Brotherhood, when the sitter was seventeen. It shows the influence of Gavarni and other French illustrators on the artist at this time.