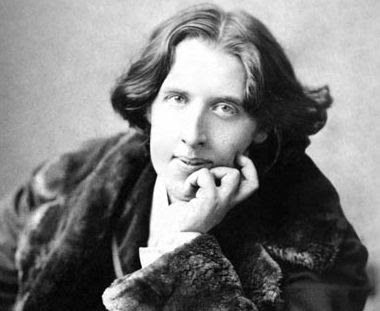 I was reading the biography of Adolphe Joseph Thomas Monticelli who influenced van Gogh and my hero Edward Hornel. Anyway it had a quote about him by Oscar who after his bankruptcy after gong to prison wrote:

In a letter to Lord Alfred Douglas, "De Profundis": "That all my charming things were to be sold: my Burne-Jones drawings: my Whistler drawings: my Monticelli: my Simeon Solomons: my china: my Library..."

In fact when he died in Paris in November 1900 he was surrounded by 300 books.

"In Twenty Years in Paris (1905), Oscar Wilde’s first biographer, Robert Harborough Sherard, describes his visit to the Hôtel d'Alsace on the rue des Beaux-Arts, where Wilde had died in penury on November 30, 1900. In July 1904, Sherard discovered that the landlord, Jean Dupoirier, had left Wilde’s shabby bedroom much as it was when the disgraced author had passed away. As Sherard observes, he was hardly the only one wanting to peek inside the tawdry chamber, with “its soiled curtains of the colour of lees of wine”. Soon after Wilde’s death, Dupoirier made a small profit by turning the room into a site of pilgrimage. Not only could devotees inspect the “leathern case” containing the “Privaz syringe” that Dupoirier had used to inject Wilde with morphine. They could also view the “the two large trunks” in which were stored “the books which he had collected during his stay in the hotel”. “He was a great reader was Monsieur Melmoth”, Sherard recalls Dupoirier remarking of the debt-ridden guest who lived quietly under this imaginative alias. “One rarely saw him without a volume in his hand.” "

Interesting that you mention your 'hero' Edward Hornel. I have quite an interest in him myself as we have a photograph of him and his sister Tizzy, posing outside our home with the artist who used to live here.

We went up to Kirkcudbright to visit Broughton House and I was most impressed with the gallery and its scaled-down Elgin Marbles frieze. I thought his original paintings were stunning; they don't come over as well on screen or in print. His name doesn't crop up online very often, which is a shame, but Bill Smith's biography is very informative.
Jane Gray

Thank you, thank you as I am planning to do a small ebook to highlight his wonderful paintings. Will come back to you when I've finished moving flats.