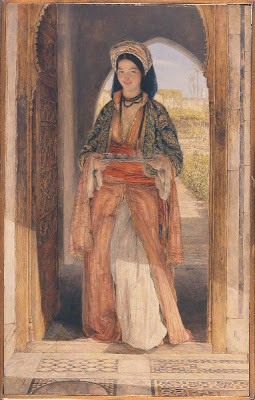 John Frederick Lewis lived in Cairo from 1841-51.
He adopted oriental robes and recorded life
in the crowded bazaars and in the harems.

When he returned to England he used
the material he had collected on his travels.

He was older than the Pre-Raphaelite artists
but shared their interest in natural light and colour.

Western artists often painted Middle Eastern subjects
but few people had travelled to the region in person.
By the middle of the nineteenth century, however,
new rail links made this possible
and there was a surge of interest in the East.