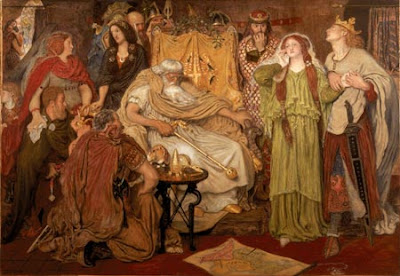 The subject is based upon Act 1, Scene 1 of Shakespeare’s ‘King Lear’. Lear had dispossessed his youngest and favourite daughter Cordelia. Her honesty in answering that she loved her father ‘according to her bond’ rather than vying with her sisters to suggest that she loved them the most, had led to Lear depriving her of the third of his kingdom that was rightfully hers. Her sisters Goneril and Regan, and their respective husbands, the Dukes of Albany and Cornwall , are shown grasping the crown that Lear has passed to them.

Madox Brown suggests the malevolent intent of these sisters by their mutual gaze. On the right, the King of France looks heavenward and swears love for his future wife, the dowerless Cordelia. The Duke of Burgundy, who will no longer press his suit for Cordelia now that she has been disinherited, stands pensively biting his finger beside Lear’s throne. Lear is shown in the grip of vain rage and already appears slightly crazed.

Behind the throne stands the Duke of Gloucester, Lear’s fool and three spearmen. To the far left, a small figure gazes back into the room with an arm extended downwards in a distraught gesture. It is likely that he is the Duke of Kent who has suffered banishment for trying to persuade Lear to revoke his foolhardy plans.

Madox Brown’s approach to historical verisimilitude in this picture is rather fanciful. The King of France wears vaguely fourteenth-century costume, Lear is dressed in a druidical toga, while Cornwall and Albany have some of the stock accompaniments of stage banditti. The mistletoe above Lear’s head strikes an authentically ancient British note as do the curiously placed oak leaves in the helmets of Lear’s soldiers. Rather less in keeping are the Greek honeysuckle motifs and the imperial griffins on the throne. The tripod table is Roman and the censer, orb and sceptre might well have emanated from the workshop of Morris, Marshall, Faulkner and Company. On the foreground map is marked Dover, where the play ends with the death of Lear, Cordelia and her sisters.

A series of sixteen Lear drawings were first produced by Madox Brown in Paris in 1844 (Whitworth Art Gallery, Manchester). Three paintings were developed from these: two versions of this subject and an earlier depiction of ‘The Parting of Cordelia and her Sisters’ (1854 private collection). ‘Cordelia’s Portion’ was commissioned in 1865 by Frederick Craven of Manchester, who liked only watercolours.

It displays the sinuous, decorative linearism of the artist’s later style which he described as ‘sensuous’, and the colours are of the mute, sandy hue that he began to favour at this time.