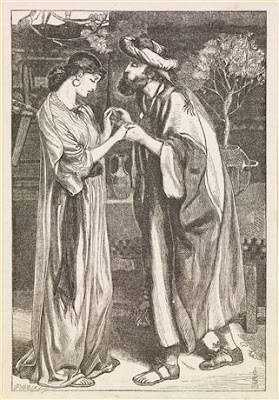 This illustration, engraved by the Dalziel Brothers after a design by Simeon Solomon, was published in 'Good Words' (vol. 3, 1862, p. 592). The subject of this illustration is based on Genesis 24:62-67 when Rebekah veils herself to meet her future husband. In this scene her veil has slipped to her shoulders, revealing her to a delighted Isaac. Solomon later produced a watercolour of the same scene retitled 'Isaac and Rebekah' (1863, Victoria and Albert Museum).

This wood engraving is one of three based on designs by Simeon Solomon. They illustrate a magazine article, 'Jews in England', in which the author attempts to summarise Jewish religious practices for a largely non-Jewish audience.Solomon was born into an observant Jewish family, and produced many works directly or indirectly connected with the Jewish faith. During his early career these were primarily subjects from the Old Testament and more rarely, as here, scenes of contemporary life. He became increasingly interested in the emotional, spiritual and aesthetic aspects of the practice of faith, moving towards images which capture religious fervour rather than accurately depicting religious practices.