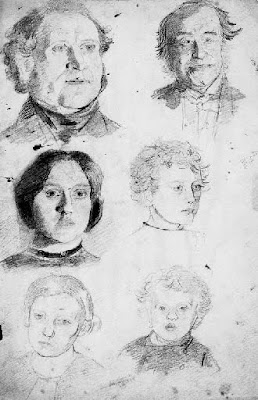 pencil, unframed
13¼ x 8¾ in. (33.7 x 22.3 cm.); and two studies of a chapel and a half-timbered house both with inscription by William Michael Rossetti 'G' and one further inscribed 'by Maenza' (on the reverse)


The follow lots are from the collection of a descendant of Lucy Madox Brown and W.M. Rossetti (who married in 1874). Lucy Madox Brown was the daughter of Ford Madox Brown and William Michael Rossetti was the brother of Dante Gabriel Rossetti. All of the drawings except lot 30, which is framed, were previously housed in one folio. We are grateful to Mrs Virginia Surtees, Angela Thirwell and Mary Rossetti Rutterford for their help in preparing this catalogue.