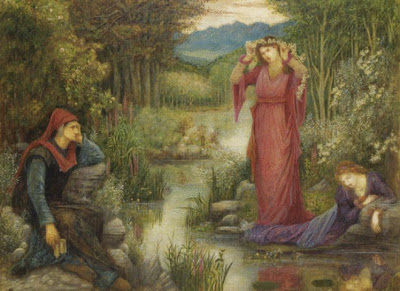 A renowned beauty and friend of William Michael Rossetti, Ford Maddox Brown, George Frederick Watts and William and Jane Morris, Marie Spartali Stillman became a well-known face of the Pre-Raphaelite movement as the occasional model for Gabriel Rossetti and Edward Burne-Jones. The face of Stillman appears in a number of Pre-
Raphaelite works, such as the figure of Danaë, painted by Burne-Jones for the opening exhibition of the New Gallery in 1888 (Glasgow Art Gallery & Museum, Kelvingrove,). His unfinished portrait of her also dates form around this time.
A respected artist in her own right, Stillman trained under Ford Maddox Brown for a number of years and became one of the most important female artists of the Pre-Raphaelite movement. She often based her works on literary and historical figure groups and Dante's Vision of Leah and Rachel is typical of her reference to Italian literary themes such as Dante or Boccaccio, often set within Italianate landscapes.
Dante's vision of Leah and Rachel occurs as he prepares to leave the seventh terrace on the Mountain of Purgatory; Lust. Leah can be seen gathering flowers, while Rachel serenely watches her own reflection. Significantly, this dream occurs between the pilgrim's experience of the seven deadly sins and his ascent into the Earthly Paradise. The tranquil presence of the biblical sisters acknowledges Dante's triumph over sin.

Dante's Vision of Leah and Rachel was exhibited in the 1st Exhibition at the pioneering New Gallery in London in 1887. Before then, Stillman had exhibited at the Dudley Gallery from the mid-1860s, the Grosvenor from 1877, and on numerous occasions in the United States from 1875, where retrospective shows were held in 1908 and 1982.

Much of Stillman's work is still held in private collections, rarely appearing at auction and remaining largely unknown by the public.
Posted by Hermes at 1:00 PM