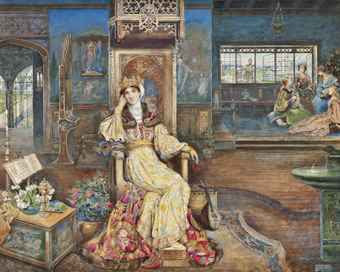 Wakley's inspiration for this sumptuous depiction of a Medieval Royal court was Christina Rossetti's 1868 poem Mother Country, in which she imagines a heaven where Queen and handmaid will be equals, reflecting in the final verse on how life is but 'a vain shadow' of the new life that will begin after death.

A follower of the Pre-Raphaelite movement, as evident in both the subject and style of this watercolour, Wakley's short-lived career showed great promise and he exhibited at the Royal Academy in 1906, the same year in which he was brutally murdered in his studio.
Posted by Hermes at 8:54 AM