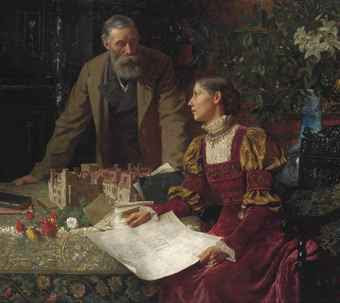 This evocative picture, much written about and exhibited in the context of late Victorian domestic architecture and the Aesthetic movement, was unveiled at the Royal Academy in 1880. Dicksee was then twenty-seven and a rising star in the ranks of the Academy, which elected him to associate membership that very year. The picture shows Sir William Welby-Gregory, fourth baronet (1829-1898), and his wife Victoria, only daughter of the Earl of Wharncliffe, poring over the architect's model and drawings for Denton Manor, the house they were building near Grantham in Lincolnshire. When the picture was exhibited the house had been in progress a year, and it would be completed four years later. Like so many projects of the kind, it was destined to be short-lived, falling victim to rapidly changing social conditions. Apart from the stable-block, the house was demolished shortly before the Second World War, thus existing for little more than half a century.

Denton Manor was designed by A.W. (later Sir Arthur) Blomfield in a 'domestic Gothic' style which, as Gervase Jackson-Stops observed in cataloguing the picture for the great Treasure Houses of Britain exhibition held in Washington, D.C., in 1985-6, 'looks back to Augustus Welby Pugin's country houses of the 1840s and 1850s, such as Bilton Grange in Warwickshire'. The style represented 'a cautious and conservative approach compared to the polychrome fantasies of William Burges and S.S. Teulon, but one that might have appealed to a squire who was already fifty, and who was rebuilding his family seat not so much to make his mark in the country as to provide a home for the pictures, furniture and other works of art inherited from his father's cousin, Gregory Gregory of Harlaxton'. The model that the baronet and his wife are discussing is seen from the same viewpoint as a perspective drawing published in The Building News on 10 October 1879 and it is conceivable that Dicksee used this as source material, although there are minor differences in the fenestration of the model as he represents it. The drawing held by Lady Welby-Gregory shows the two-storey oriel window over the front door, and bears Blomfield's signature and the date 1879. A portfolio of further drawings seen beyond her right arm conceals the immense service wings that were built round two courtyards, a far bigger space than the family's own quarters.

Lady Welby-Gregory belonged to the group known as 'The Souls', an aristocratic coterie devoted to intellectual and artistic pursuits and disdainful of the more worldly pleasures indulged in by the Prince of Wales's Marlborough House set. Her father, the Earl of Wharncliffe, was a patron of Edward Poynter, who painted enormous mythological subjects round the billiard room at Wortley Hall, the Earl's country house near Sheffield, in the 1870s. Other 'Souls', such as Violet, Duchess of Rutland and Lady Brownlow, were either related to or neighbours of the Welby-Gregorys, and their daughter, Nina, married yet another member of the circle, Harry Cust. Lady Welby-Gregory herself was something of a bluestocking. She wrote obscure philosophical works, possibly under the influence of Arthur Balfour, a pre-eminent 'Soul' who published more than one treatise of this kind. She was also an accomplished needlewoman, founding the Decorative Art Needlework Society, an offshoot of the Royal School of Needlework at South Kensington.

Lady Welby-Gregory's tastes and talents are amply alluded to in the picture. She is dressed lavishly but in the Aesthetic style, and her surroundings are eminently cultured. She sits on an ebony chair of a seventeenth-century Goanese type, generally thought of by the Victorians as 'Elizabethan'. Behind her are an old lacquered cabinet and a large blue porcelain vase, the latter the quintessential symbol of Aesthetic sensibility since Rossetti, Whistler and other trendsetters had pioneered the taste for 'blue-and-white' in the 1860s. As for Lady Welby-Gregory's needlework skills, these are reflected in the table-cover, richly embroidered with a swirling naturalistic pattern that could easily have been designed by one of the moving spirits behind the Royal School of Needlework, William Morris. It is complemented by the spray of chrysanthemums on the table and the lilies in the vase, further tokens of Aesthetic credibility and reminders that art depends on the painstaking study of nature, a theory that had long since gained currency thanks to Ruskin and the Pre-Raphaelites.

In 1880 the R.A. was a newcomer to Burlington House, having moved there from Trafalgar Square only the previous year. Placed prominently in Gallery 1, Dicksee's picture won almost universal acclaim. As always, there were quibbles. F.G. Stephens, writing as usual in the Athenaeum, thought the effect a little 'hard' and complained that the table-cover, though 'brilliantly painted' and 'a tour de force', was 'much too obtrusive and vivid'. But the general view, as the Spectator put it, was that this was 'the greatest work yet produced by (the) artist,' even surpassing his immensely popular Harmony (Tate Britain), shown at the R.A. in 1877 and bought for the Chantrey Bequest. Several critics agreed with the Illustrated London News that the 'care and skill' that Dicksee had lavished on the details of the composition, giving it an 'almost illusory' presence, were reminiscent of the old masters. Stephens described the picture as being 'in the manner of Moroni', and for the Times it was 'a very potent and rich piece of colour, of Venetian audacity.'

According to E. Rimbault Dibdin, writing on Dicksee in 1905, the success of The House Builders caused the artist to receive portrait commissions 'in embarrassing profusion', but this was not the path he wished to follow and he did not exhibit another portrait at the R.A. until 1901. This may be true, but in later years, as the subject pictures that had sustained the Victorian art economy for so long finally went out of fashion, Dicksee was glad enough to turn to portraiture for a living.