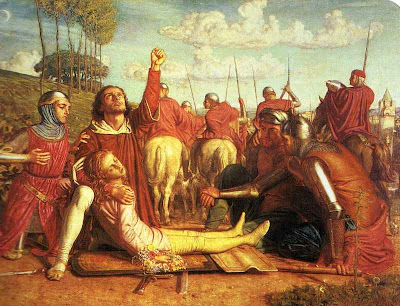 [Rienzi Vowing to Obtain Justice for the Death of his Young Brother. Slain in a Skirmish between the Colonna and Orsini Factions]
1848-9
oil on canvas
Private Collection
http://www.victorianweb.org/painting/whh/drawings/25.html
http://www.artchive.com/artchive/H/hunt.html
.
*** update ***
I only just read that in this picture of the 13th c revolutionary Cola di Rienzi
http://en.wikipedia.org/wiki/Cola_di_Rienzi
Rienzi was modelled by Rossetti and to his right (as the kneeling knight) is Millais. It as the first of Hunt's pictures to include the famous 'PRB' monogram. The subject is taken from Bulwer Lytton's (famous then, almost forgotten today) Rienzi, the last of the Roman Tribunes. It was exhibited at the RA in 1849 (alongside Millais' Lorenzo and Isabella). The background was carefully painted to fall in with Ruskin's ideas. Several critics have also pointed out that it also shows Hunt's inability to paint natural poses - note for example the soldier on the far left.
Posted by Hermes at 5:00 PM