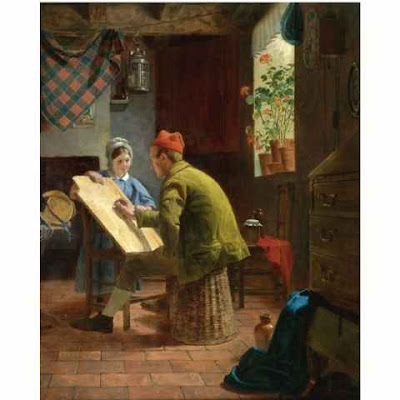 1855
oil on panel
exhibited at the RA in the same year
It was Rossetti who admired Collinson's first exhibited picture The Charity Boy's Debut (1847) that recommended Collinson to be part of the PRB. It helped no doubt that at the time he was engaged to Christina Rossetti.
It is debatable whether this picture is really influenced by the Pre-Raphaelite ideals, its sentimental, domestic tone reminiscant of many 'ordinary' Victorian pictures.
Collinson abandoned the priesthood in 1854, and though he tried to re-enter the art world never achieved any great recognition, not helped by his narcolepsy, a condition that caused him to fall asleep at any moment without warning.
Posted by Hermes at 5:00 PM