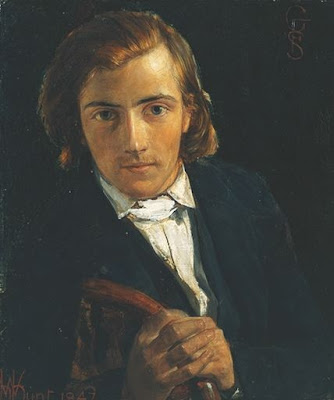 http://en.wikipedia.org/wiki/Frederic_George_Stephens
The painting (now in the Tate Gallery) was painted by William Holman Hunt on wood in 1847. They were best friends for years but had fallen out by the 1870's (a common fate of Hunt's friends). Their long correspondance however tells us a lot of what we know about the PRB. It was painted the year before the PRB was officially formed when Stephen's was a pupil of Hunt. It is still rather crudely painted, but the relaxed pose and the staring eyes show his abilities.
Posted by Hermes at 5:00 PM