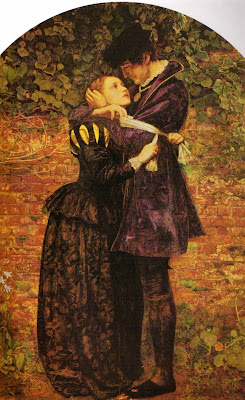 1851-2
Oil on canvas
Makins Collection
.
Depicting a scene from the 'Massacre of the Innocents' in Paris, 1572.
http://www.humanitiesweb.org/human.php?s=g&p=c&a=p&ID=216
http://www.illusionsgallery.com/Huguenot.html
The full title is 'A Huguenot, on St Bartholomew's Day, Refusing to Shield himself from danger by wearing a Roman Catholic badge'. On that day of massacre it was decreed that all Catholics should wear a white band on one arm and a cross in their hats. Notice the crushed red flower at his feet, symbolising certain death.
It won the Liverpool prize and was much admired and he had to paint the Black Brunswicker (1860) because of public pressure foe 'another Huguenot'.
Posted by Hermes at 5:00 PM