Study of Jane Morris asleep in an upholstered armchair Rossetti 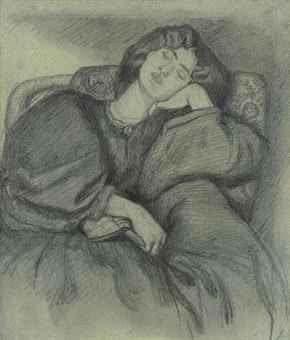 The book the sitter has been reading is William Morris's first volume of poetry, The Defence of Guenevere, published in 1858. There is a touch of intentional humour in the suggestion that she has found it so soporific. By the late 1860s, when the drawing was probably made, Rossetti was deeply in love with Jane Morris, and her husband was often the victim of his barbed humour. A group of caricatures from this period in which Rossetti openly pokes fun at him is in the British Museum (see J. A. Gere, Pre-Raphaelite Drawings in the British Museum, London, 1994, pp. 46-55, nos. 25-28, 31-32, all illustrated).

According to Virginia Surtees (loc. cit.), the present drawing was formerly inscribed by William Michael Rossetti 'By Dante G. Rossetti of Mrs Willam Morris towards 1870' (on a previous label attached to the backboard).

The question is, did Jane pose for this, knowing the 'joke' ?
Posted by Hermes at 6:00 AM

I've been peering in at the picture trying to see how we know that's the book she's fallen asleep over.

I wonder what she made of the picture - maybe she posed . . . but, in contrast with all the other pictures of her, she's in a rather an unflattering slump which emphasises the heaviness of her features.

Rossetti noted the book as part of the 'joke'. Perhaps she wasn't aware of his drawing her - perhaps she was. We'll probably never know, though her letters are being published late 2012.