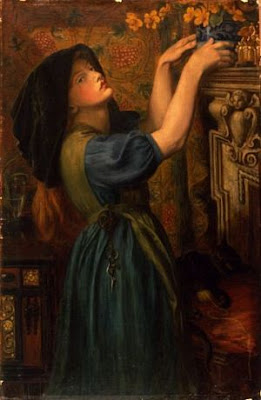 In a letter to Frederick Leyland (January 31, 1874), DGR described the picture thus: “I shall call the picture either Spring Marybuds or The Bower Maiden. It represents a young girl (fair) in a tapestried chamber, with a jar containing marybuds (or marsh marigolds, the earliest spring flowers here), which she is arranging on a shelf. Near her is a cat playing with a ball of worsted. The picture abounds in realistic materials & is much like the Veronica in execution & not inferior to that picture in colour.” (Fredeman, Correspondence, 74.21)

In a letter to his mother (February 23, 1874) DGR identified the model as “Little Annie”, a young lady later described by Theodore Watts-Dunton as a house assistant at Kelmscott (Fredeman, Correspondence, 74.36)


Annie was our gardener's niece and her wonderful fair hair, transparent eyes and milk-and-rose complexion are to be seen in Rossetti's 'Gardener's Daughter' painted at Kelmscott.
May Morris
Posted by Hermes at 9:38 AM