William Davis - A Day's Sport at Bidston Hill circa 1865 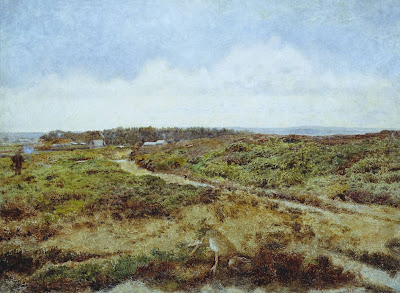 Born in Dublin, Davis came to England by 1837. He probably settled in Liverpool in the early 1840s, when he first exhibited at the Liverpool Academy. He began painting small-scale landscapes around 1853 and soon came under the influence of the Pre-Raphaelites, who were regular exhibitors at the Liverpool Academy. They (Rossetti and Ford Madox Brown in particular) in turn became great admirers of Davis's work. The landscape of Bidston Hill and Bidston Common, now part of Birkenhead, was a popular subject with Davis and other Liverpool Pre-Raphaelites, who appear to have valued it for its un-picturesque, down-to-earth character.
September 2004
http://beta.tate.org.uk/art/work/T04170
Posted by Hermes at 7:00 PM