Edward Burne-Jones - Study of a head, probably for the Angel in 'The Annunciation' 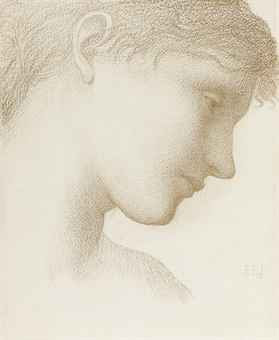 This impressive drawing bears a superficial resemblance to the studies in red chalk on coarse-grained paper that Burne-Jones made in the mid-1860s, but closer inspection shows it to be of later date. In fact it is almost certainly a study for the head of the Angel in The Annunciation (fig. 1), a major painting that the artist exhibited at the Grosvenor Gallery in 1879 and sold to George Howard, Earl of Carlisle, who was one of his staunchest patrons. The painting was begun in 1876 and the study was probably made that year or a little later.

The use of a rather waxy chalk is typical of Burne-Jones's work at this period, usually occurring on particularly important stained-glass cartoons that he coloured in this medium, thus turning them into semi-independent pictures. Examples are the Last Judgment designed for the East window at SS Michael and Mary Magdelene, Easthampstead (Birmingham Museum & Art Gallery) and the Paradise, with the Worship of the Holy Lamb for All Hallows, Allerton, which appeared in the Yves Saint Laurent/Pierre Bergé sale held by Christie's in Paris, 23-25 February 2009, lot 90. Both these magnificent cartoons were drawn in 1875 and coloured before being exhibited at the Grosvenor Gallery in the winter of 1881. Another example of the same phenomenon is the famous Pelican in her Piety (William Morris Gallery, Walthamstow), drawn in 1880 for the East window at the church of St Martin, Brampton, in Cumberland - a further instance, as it happens, of George Howard's patronage.

The drawing has a fine provenance. Its first owner was William Graham, a wealthy India merchant who sat as Liberal member of Parliament for Glasgow from 1865 to 1874. Like Howard, he was both a patron and friend of Burne-Jones for many years, equating his work with the early Italian pictures that he also collected. When Graham died in 1885 the drawing was inherited by his daughter Frances, who had married Sir John Horner of Mells Park, Somerset, two years earlier. A leading member of the social set known as 'The Souls', Frances was the most important of the young women with whom Burne-Jones enjoyed affectionate but platonic relations in later life. She died in 1940 and the drawing descended in her family until last year.
http://www.christies.com/lotfinder/sir-edward-coley-burne-jones-bt-ara-rws/5521045/lot/lot_details.aspx?from=salesummary&pos=6&intObjectID=5521045&sid=93819c00-d98d-406c-88eb-e2cc4b172744&page=1
Posted by Hermes at 6:00 AM